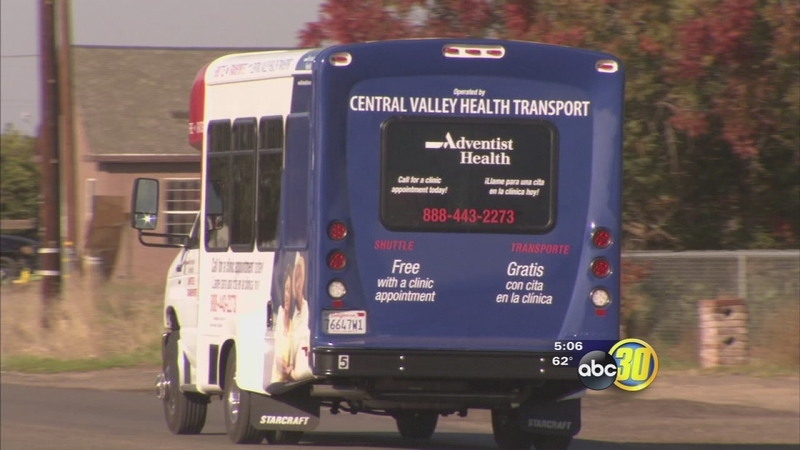 FRESNO, Calif. (KFSN) -- A new medical service is already improving the health of many people in the valley. It's a free shuttle service that takes patients from their doorstep to their doctor.

The rides have become a vital part of health care in Fresno and Tulare Counties, according to users of the service. Elia Herrera gets front door service at her home in Cutler to catch a ride to her doctor's office at the Adventist Healthcare Clinic in Orange Cove. But she almost canceled her appointment because she had to care for her grandchildren.

The staff at the clinic assured her, the kids could also ride on the shuttle too. So Elia wouldn't have to miss her appointment. "I was very happy that they could accommodate the grandkids," Herrera said in Spanish. "If I don't have a car, if my car is broken, if my husband can't bring me, if my daughter can't bring me; it's extremely convenient."

The shuttle runs to Adventist clinics started last year in Hanford and Lemoore, but then expanded service in November to Dinuba, Reedley, Orosi and Orange Cove. Officials at the health care network were noticing too many patients were missing or canceling their appointments simply because they had no transportation. Many rural patients were also having a difficult time reaching the clinics that could be miles from their home.

Adventist launched the free service and patients are filling the seats. The shuttle service started in January 2014 with just 14 rides to Adventist clinics. A year later, that number exploded to 5,000 roundtrip's for patients, and the need is still growing.

Tony Hoots, with Central Valley Health Transport, runs the shuttle service. He was contracted by Adventist and said it's rewarding to provide the rides. "We help everybody, and we have some folks who have a walker, are stroke patients or maybe just had knee surgery," Hoots said. "We offer the lift. All of our vans have wheelchair lifts. When patients make their appointments, they can book a ride on a shuttle."