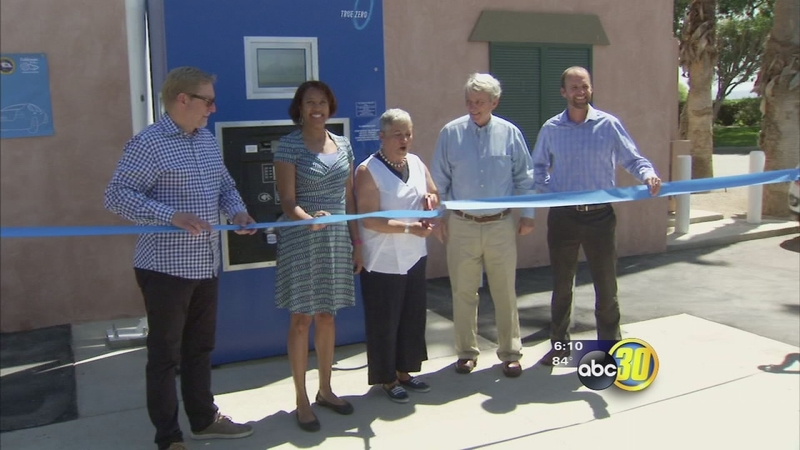 COALINGA, Calif. (KFSN) -- Hydrogen is seen as a promising alternative fuel source. It can be made from natural gas or water. State officials have gone "all in" on vehicles which run on hydrogen fuel cells. There aren't many yet but the numbers expected to grow as more fueling stations are built.

The location of Harris Ranch along Interstate 5 in Coalinga made it an ideal spot to open a hydrogen fueling station. It's run by First Element.

CEO Joel Ewanick said, "This one becomes really, really important because it connects both ends of the state. It allows somebody to drive from San Francisco all the way down to Disneyland if they want and they can do it without any range anxiety."

It cost California Air rRsources Control Board chair Mary Nichols just over $67 to fill up her Toyota Mirai at the new station. The clean-burning hydrogen fuel will last her 300 miles.

Nicols explained, "I think it's a big part of the future. We can't say hydrogen vs. batteries vs. very, very advanced hybrids. I think we're going to have all of those probably for another decade or so to come."

In California, you'll only find 15 hydrogen fueling stations but with the state investing $20 million dollars this year the number will jump to 100 stations next year.

Harris Ranch owner John Harris said, "It's good to have choices and make it competitive. This is subsidized initially but the concept will once it gets critical mass it can compete head on with other forms of transportation."