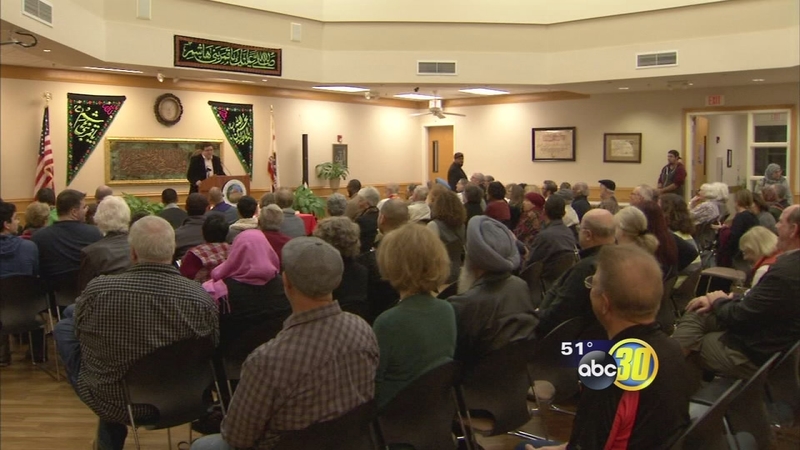 FRESNO, Calif. (KFSN) -- One week after the Paris attacks, nearly twenty Fresno religious leaders came together Friday night to pray for victims of terrorism around the world.

They took to the podium at the Islamic Cultural Center of Fresno to pray for peace and the victims of terrorism and to condemn those who perpetrate it. "The sense in Fresno is outstanding," said Rabbi Rick Winer of the Temple Beth Israel. "The comradery between our religious leadership is fantastic and we need it to spill forth to everyone and we need to pray for and work for the end of violence."

One common theme throughout the evening was that terrorist groups such as ISIS do not represent Islam or any religion for that matter. And they can only be defeated when people of all faiths band together against them. "It is extremely important that the entire world comes together," said ICC Director Reza Nekumanesh. "Every religion, every culture, every nation, everybody stands together to defeat the extremism and terrorism of groups like ISIS, Boko Haram, etc."

Many weighed in on the fierce debate over whether to allow Syrian refugees into the United States. It's a topic that hits home to Fresno State student Fatima Hasan, who now calls America home after escaping Baghdad in 2006. Her family even spent time in Syria while they were on the run as refugees. "I pray that we as Americans can learn and open our eyes and hearts to see that these Muslim refugees are not the criminals. ISIS is. And ISIS isn't Muslim, what they're doing is not Muslim," Hasan said, to a large round of applause from the crowd of at least 150 people.

"And that was the most emotional thing I heard tonight, listening to her life story and how tough it's been," said Fresno Christian Kelli Reimer.
It's been a tough week for the whole world.