KFSN
By Vanessa Vasconcelos
FRESNO, Calif. (KFSN) -- After testing positive for COVID-19, an 18-year-old man who had been brought to be booked into the Fresno County Jail for auto theft last Friday has been located and quarantined after being released.

The man was supposed to be booked on Friday, but the Fresno County Sheriff's Office said the suspect was showing symptoms for the virus, so instead of processing him, they took him to the hospital to be tested.

While they waited for the results from health officials, they brought the suspect back into booking for 45 minutes, but he qualified for the emergency $0 bail and was released.

He was never actually processed into the jail.

The Fresno Police personnel, including a sergeant and three officers, who came into contact with the suspect, have been ordered to quarantine for 14 days. A police dog has also been quarantined.

"The officers are ordered to stay home under the threat of a misdemeanor so they are required to not only stay home but stay in a room," said Fresno Police Chief Andy Hall.

The suspect is not being identified because of federal law protecting patient health information.

The officers were involved in the suspect's arrest on Friday, April 10, and began their self-isolation the next day, when the suspect's test results came back positive for COVID-19.

When officers were arresting the suspect, he told them he had been exposed to someone with COVID-19.

"But this isn't new at all, most of our suspects now indicate they have exposure so they can avoid going to jail," said Hall.

The Fresno County Sheriff's Office is now notifying any jail staff to see who may have come in contact with the individual.

Fresno Police say they had arrested the same suspect on March 3rd for the same offense (vehicle theft) and he was released early from the jail.

"I can't put his photo out or his name out into the community. So this person could be standing next to you in line at any of the stores that we currently have open," said Hall.

Sheriff Margaret Mims said her office was notified of the results Tuesday.

"There's no other inmates that were exposed, people were properly protected," said Mims.

She added correctional and medical staff who had direct contact with him have been notified and all areas the teen passed through were immediately sanitized.

The man is reportedly cooperating with public health staff as they conduct their investigation. 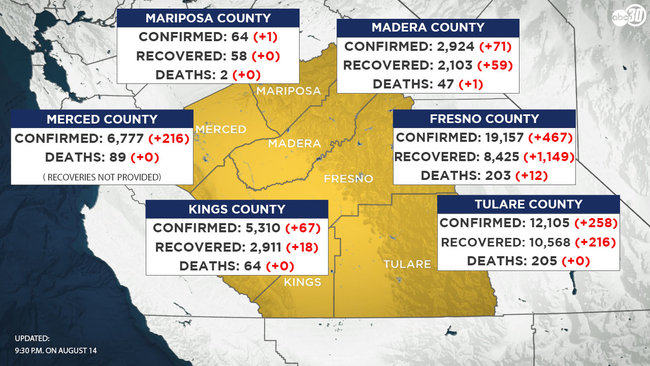