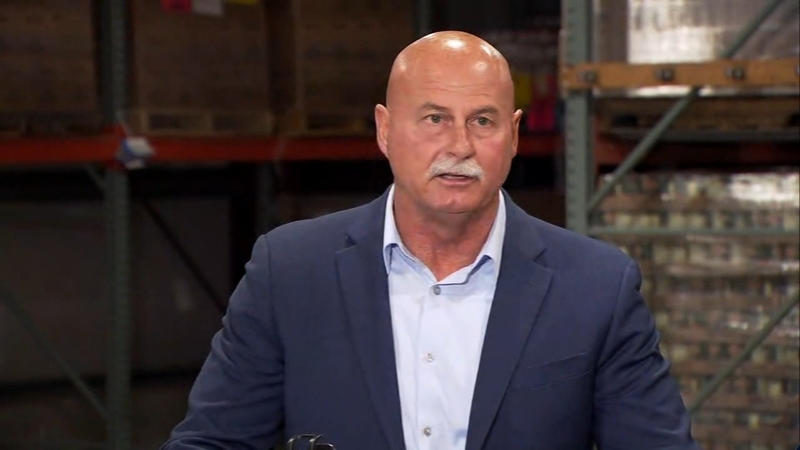 FRESNO, Calif. (KFSN) -- The coronavirus caught up to Fresno mayor-elect Jerry Dyer a week after his likely exposure through a coughing Fresno County supervisor.

A cough was the first symptom that let Dyer know he probably had a coronavirus infection.

He told Action News he's had a fever, chills, severe body aches, and that cough is uncontrollable at times.

An initial test came back negative, but a few days later, the symptoms arrived and the illness was undeniable.

Dyer was watching for trouble after spending last Tuesday with Supervisor Brandau, who called him about his own coronavirus diagnosis on Thursday.

Brandau had a cough Tuesday and they spent some of the evening unmasked and indoors, but Dyer says he didn't notice the cough and doesn't remember being in close proximity to Brandau for very long.

"Goes to show you it probably doesn't take much in the way of contact to contract the virus," Dyer said.

On Wednesday, Dyer said his symptoms were now coming on stronger, and that he was experiencing uncontrollable cough, chills, fever, and body aches.

WEAR YOUR MASK
Mayor-Elect Dyer took a bad turn overnight.
“It got worse,” he told me: “Hurts to move or cough. Very weak. It’s a weird virus. Wear your mask.”

Since the start of the pandemic, Dyer has attended city events wearing a mask.

The group he was with on election night were people he sees on a weekly and even daily basis.

"It wasn't like I was going out into a strange environment so you feel comfortable... and maybe it's a false sense of comfort," he said.

On Thursday, Dyer said he woke up feeling tired, but as the morning went on he started to feel the same aches and pains. He said he's also feel shortness of breath.

NEW: Fresno’s mayor-elect, Jerry Dyer, tells me he’s still feeling the effects of COVID.
He says it feels like a head cold, back aches, nausea, and general weakness, plus chills that come and go.
He’s gotten supportive messages from Gov. @GavinNewsom and former @JerryBrownGov

Dyer added, "My wife and I have truly been touched by the outpouring of love and support from our community. I will never forget this. This is what makes Fresno so special."

Jerry Dyer said his symptoms are now coming on stronger, and that he is experiencing uncontrollable cough, chills, fever, and body aches.

Dyer said he believes his wife has contracted the coronavirus as well. And after spending time with his wife, Dyer's daughter and son-in-law have developed symptoms now too.

"I feel horrible about that...that I have given that to her," he said on Wednesday.

Dyer said his wife and daughter were tested on Thursday morning. His son-in-law tested negative for the virus on Wednesday.

Dyer has had little difficulty breathing but will continue to monitor his oxygen levels at home.

He said he knows it's possible his symptoms could worsen, especially after speaking to Supervisor Brandau Wednesday morning.

"And he sounded horrible. and this is the ninth day after he first started to show symptoms," Dyer said.

About three dozen county employees are away from work because of the Brandau connection and health officer Dr. Rais Vohra says at least five of them have tested positive.

He says it's not surprising the virus would spread in an office setting.

"The CDC just came out with a paper that said office work is higher risk," Dr. Vohra said. "You know, we think about factory workers and food workers and we've talked about the different high risk occupations. We don't necessarily think about office workers as having higher risk, but in fact a lot of coronavirus transmission is occurring in office spaces. I think this is a good example of the kind of risk that can be posed."

Back in May, Dr. Vohra recommended everyone wear a mask while working indoors.

Brandau didn't wear one at the supervisors meeting on Election Day, so when the quarantine spread from the county Hall of Records to Fresno's City Hall, council president Miguel Arias got upset.

"It's one thing to politicize wearing a mask," Arias said. "It's one thing to attend open rallies to criticize the governor and public health officials. It's another thing to put the basic health and safety of county and city employees at risk because you're being irresponsible."

We reached out to Brandau Tuesday, but got no response.

Karbassi says this spreading event is evidence you can't let your guard down.

But both he and Brand told Action News they've tested negative and feel healthy.

Assemi didn't respond to our requests for comment, but told his own media outlet he also tested positive.

We asked Kaiser if they had contact tracing underway or if Torossian was isolated from hospital operations, so there wouldn't be possible patient or healthcare worker exposure.

They initially gave us this statement:

"Our understanding is that this is a private party not associated with Kaiser Permanente. Please check with those involved for any additional information."

"This was a private gathering, hosted on our employee's own time and not associated with Kaiser Permanente. Kaiser Permanente firmly supports all safety precautions to keep our employees, members, and communities safe. We regularly communicate to employees, members, and the community the importance of social distancing, wearing a mask, hand hygiene, avoiding gatherings, and other practices to keep themselves and others safe - and we rigorously require and practice these precautions in all of our facilities and activities. We have protocols in place to test and safely treat anyone confirmed or suspected to have COVID-19."

And they shared a statement from Torossian:

"This was a small private gathering, hosted on my own time and not associated with Kaiser Permanente, that I believed at the time to be safe. My family and I are taking appropriate precautions to be tested and quarantined, and as I've been working offsite for several months, I haven't had any recent in-person contact with colleagues at Kaiser Permanente."

Dyer says his diagnosis won't change how he approaches the job he takes in January because he already knew the virus was serious.

It almost killed his father and now he's feeling sick.

But he hopes his illness convinces others just how real it is.

"As I transition into the mayor's role, it will continually be emphasized the need to be safe to minimize the spread of COVID," he said. "My message would be to people, don't wait for the call from the county health department, don't wait for symptoms to come on you, wear a mask. Be considerate of other people."
Report a correction or typo
Related topics:
health & fitnessfresnocoronavirus californiajerry dyercoronaviruscovid 19
Copyright © 2022 KFSN-TV. All Rights Reserved.
CORONAVIRUS
Watch NatGeo documentary 'The First Wave' free for 48 hours
Starbucks no longer requiring US workers to be vaccinated
Some CA residents encounter problems ordering COVID tests
Warning about purchasing fake negative COVID-19 PCR test results
TOP STORIES
Man charged with murder of 2-year-old whose father died a year earlier
Valley Children's Hospital delaying some non-urgent surgeries
How reliable are rapid tests? Dr. explains when to depend on results
Good Sports: Fresno woman gains recognition with indoor rowing
Valley ag business continues to feel impact of supply chain issues
Merced police searching for missing 87-year-old man
Website for free COVID tests is here. How does it work?
Show More
Biden, 1 year in, says nation weary from COVID but in a better place
Man suffered severe burns after explosion at Table Mountain Casino
Man hit by car in northwest Fresno
Suspects caught on camera stealing from Kohl's in northwest Fresno
Domestic violence suspect arrested after standoff with Fresno police
More TOP STORIES News