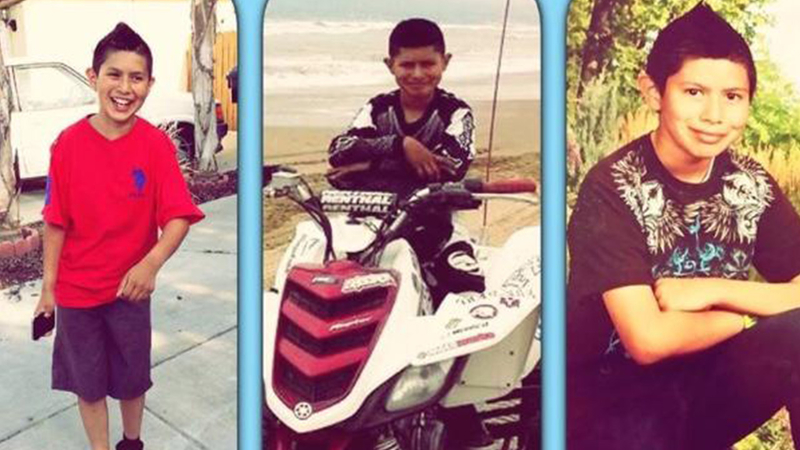 FRESNO, Calif. (KFSN) -- A 12-year-old Corcoran boy may only live one more night, but now his family is fighting to keep him alive. Jonah Panduro has been in a medically induced coma for one week. He was critically injured in a boating accident on Lake Kaweah.

Taking a child off of life support is a decision no parent should ever have to make, but Jonah's parents say they can't even make that heartbreaking choice.

Jonah was inner tubing on Lake Kaweah just last Sunday. A metal loop snapped off the tube while he was being pulled and lodged in his head. Jonah's family says two doctors at Community Regional Medical Center in Downtown Fresno declared him brain dead this weekend. Yet during the past week, the family says they've seen the boy cry and move his fingers.

"The medical response is like, 'oh, his eyes are just swelling up, that's why his eyes are opening' or 'he's just building moisture in his eyes,'" said Panduro.

Doctors are following California state law, according to the family, by taking the child off of life support Monday. They say two doctors have to pronounce a patient brain dead to move forward with the decision. And even if they wanted to, the family says they can't take Jonah home because any movement would kill him.

"We have faith, we have hope that there is something that could still be done for him, but they're just stating that they've already did plenty of exams, they've been getting medication to him, and just basically that they're running out of options," said Gina Carranza, Jonah's aunt.

A representative from CRMC says they can't comment because of privacy issues. The family wants to fight the hospital but hasn't been able to reach an attorney this Fourth of July holiday.

The family says unless he shows brain activity, or an attorney steps forward to help them, Jonah will be taken off life support Monday at 10 a.m.