National Hispanic Heritage Month is a time to recognize the contributions made by Hispanic and Latino Americans. National Hispanic Heritage Month is a time to recognize the contributions made by Hispanic and Latino Americans. It's a time to celebrate their heritage and culture while recognizing their presence and influence in the United States.

With thirty books published in poetry, spoken word, novels for young adults and collections for children, Juan Felipe continues to work for all audiences.

Juan Felipe Herrera was born in Fowler, California. The son of migrant farm workers from Mexico, his family often moved from town to town. His father would pay a penny a word to learn English. His mother grew up singing about the Mexican Revolution and would teach Juan Felipe songs. Juan Felipe grew up with a passion for writing and attended schools in Southern California. He went on to study at UCLA and Stanford University.

In the late sixties, Juan Felipe became involved with the new spoken word and street teatro Civil Rights movement - reading and performing at schools, prisons, farm worker camps and in many college campuses across the nation. Almost in every city he has lived in or visited, Juan Felipe founded spoken word multi-genre performance troupes: Teatro Tolteca in Los Angeles, 1971, TROKA in San Francisco, 1983, Teatro Zapata in Fresno, 1992, Manikrudo in Humbolt, 1996, and the Verbal Coliseum in Riverside, 2007. A number of chronicles from this period of public experiment can be traced in the prized "187 Reasons Mexicanos Can't Cross the Border: Undocuments 1971-2007. " He has also sculpted many language-centered texts, "Exiles of Desire," "Akrlica, Border-Crosser with a Lamborghini Dream" and the award winning "Half of the World in Light - New and Selected Poems." What is at the heart of his work: the poet as a technician of multiple registers, advocate of multicultural voices and as Thich Nhat Hanh says, devotee of inter-being, that is, tearing down the walls that separate us personally, culturally and globally. 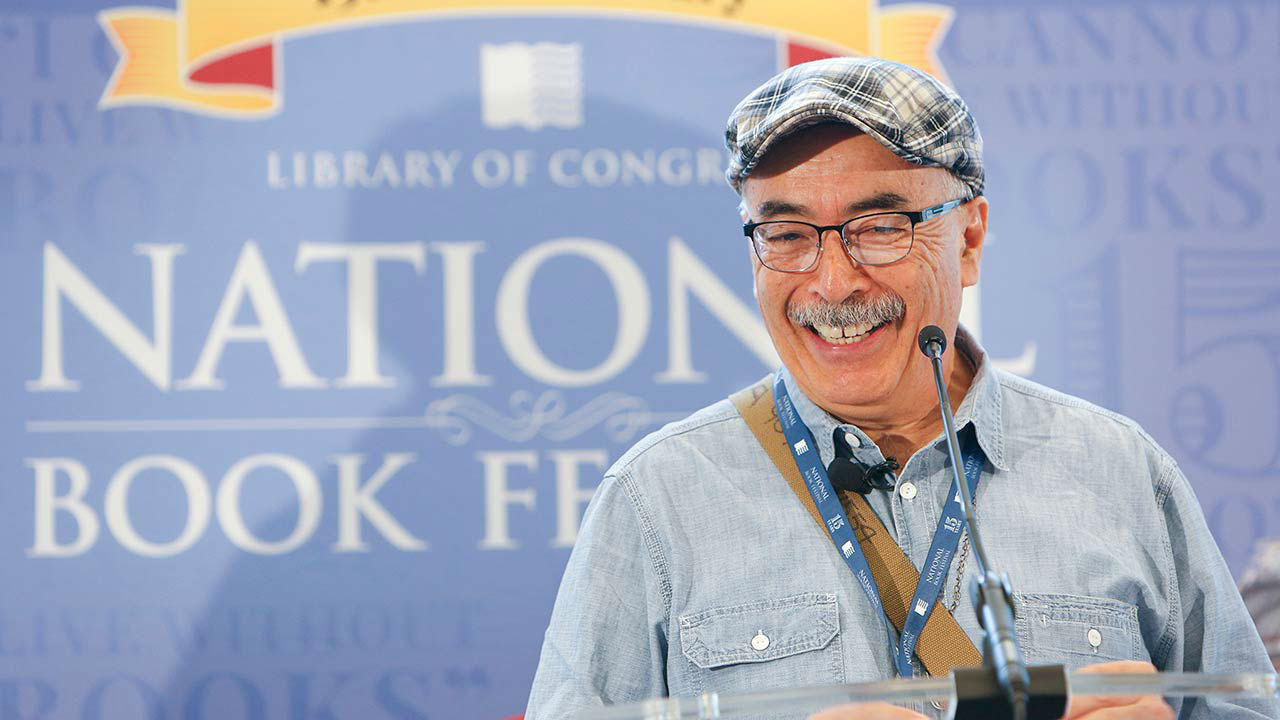 PHOTOS: The life of Juan Felipe Herrera
With thirty books published in poetry, spoken word, novels for young adults and collections for children, Juan Felipe continues to work for all audiences.

With thirty books published in poetry, spoken word, novels for young adults and collections for children, Juan Felipe continues to work for all audiences. His recent awards for his poetry include the Guggenheim Fellowship, the National Book Critic's Circle Award, the Latino International Award, the PEN USA award and the Josephine Miles Pen/Oakland Award. His early arts grants through the 70's and 80's were from the California Arts Council. His recent non-fiction book, "Portrait of Hispanic American Heroes" was awarded the Pura Belpr Honors Award. He is a member of the Board of Chancellors of the Academy of American Poetry and recently completed his appointment by California Governor Brown as the California Poet Laureate. His favorite color is Chile Verde green and his twitter handle is @cilantroman. Herrera was a professor and chair of Fresno State's Chicano and Latin American Studies Department from 1990 to 2004. He is a Professor Emeritus of creative writing at UC-Riverside. His new poetry book for 2015 is Notes on the Assemblage published by City Lights.

Juan Felipe says, "If you want to write for the people pour kindness inside every word." Recently, he served as the California Poet Laureate. In September 2015, Juan Felipe Herrera became the United States Poet Laureate, the first Latino to ever hold the position. During his official appearance as the 21st Poet Laureate Consultant in Poetry, Juan Felipe Herrera announced at the Library of Congress National Book Festival the official project of his laureateship, La Casa de Colores-including an invitation to Americans to contribute a verse to an "epic poem" about the American experience.

The poem, titled "La Familia," will unfold monthly, with a new theme each month about an aspect of American life, values or culture. Herrera will compile the contributions and announce the next theme on the Poetry and Literature Center's blog. A word cloud illustrating the responses will be posted to provide a visual snapshot of the language contributors used to articulate the themes.

La Casa de Colores also will include a monthly feature on resources at the Library of Congress. "El Jardin," a feature that includes videos, poems and blog posts, will show Herrera interacting with and responding to select items throughout the Library.

According to Herrera, "La Casa de Colores, 'the House of Colors,' is a house for all voices. In this house we will feed the hearth and heart of our communities with creativity and imagination. And we will stand together in times of struggle and joy."

In developing the project, Herrera said, "If it is a 'casa,' a grand house for all of us, we must be a 'familia,' a family. A family cannot flourish without a 'jardn,' a garden to care for, to create. Our garden is our luminous Library of Congress with inspirations nestled inside for more than 200 years."