The team was one of three programs cut by Fresno State in 2020.
KFSN
By Brandon Johansen 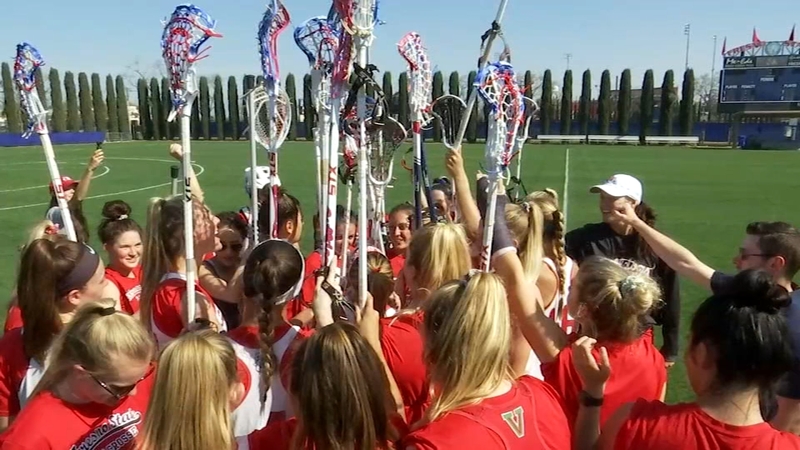 FRESNO, Calif. (KFSN) -- Five members of the Fresno State women's lacrosse team are part of a lawsuit against the university, claiming the school is in violation of Title IX and alleging discrimination against the team.

The program was cut, along with men's tennis and wrestling, as part of cost-saving measures brought on by state budget cuts and revenue losses during the COVID-19 pandemic.

Abbigayle Roberts and Megan Walaitis, who are co-captains of the team, are two of the five players named in the lawsuit. They believe the legal action has been a long time coming.

"I think this year was just the breaking point, for us two at least," Walaitis said.

"The goal of the lawsuit is very simple. Get Fresno State to reinstate the women's lacrosse team, treat it like a real varsity team and force it to comply with Title IX," said Arthur Bryant, an attorney from Bailey and Glasser who is representing the players.

Bryant says the school was already in violation of Title IX before the program was cut because it did not give athletic opportunities to women equal to the amount of women enrolled in the undergraduate classes at the university. The suit alleges that the team has been mistreated for years, especially heading into the final season before being eliminated as an athletic program.

"I still don't have cleats for this year and our game is tomorrow. The freshmen don't have the proper goggles and we play tomorrow," Roberts said. The lack of proper equipment is just one of multiple issues the suit mentions, which can be viewed in full below.

(Click/tap here to see document in new window)
"When we talk about not having the proper equipment, they're not setting us up to succeed in our final varsity season, they're treating us like we've already been cut as a program," Roberts added.

Because the case will likely last much longer than their final season, they're asking the court to order Fresno State to get them proper equipment and to treat them like a varsity team until the case can be proven in court. After that, they plan to work on getting the program reinstated.

Fresno State released a statement in response to the suit, saying:

The University stands behind its position that, as a result of State budget reductions and significant revenue losses due to the COVID-19 pandemic, the University had to make the difficult decision to eliminate three sports teams: Men's Tennis, Men's Wrestling and Women's Lacrosse after this academic year. The Department of Athletics will ensure continued efforts toward Title IX compliance as a result of these reductions. The University is unable to comment any further in regard to matters involving pending litigation.