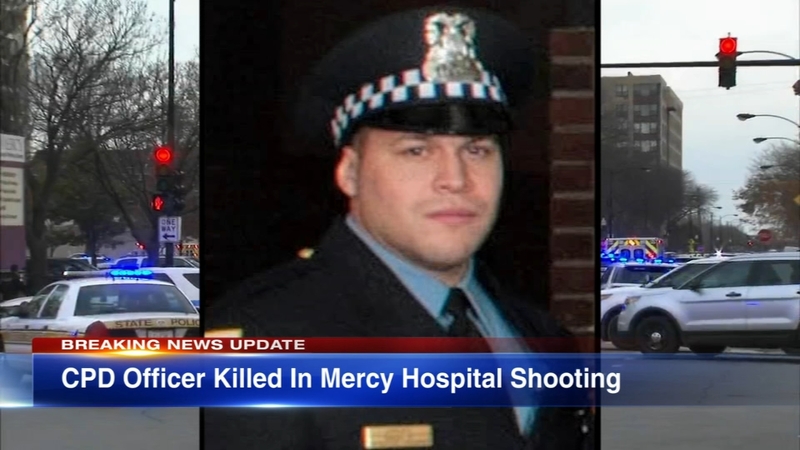 CHICAGO -- Flags outside a Chicago police station have been lowered to half staff Tuesday in honor of a fallen police officer killed in a shooting at Mercy Hospital Monday afternoon on the Near South Side. An ER doctor and a hospital worker killed in the shooting are also being mourned.

Officer Samuel Jimenez was one of three people killed by a gunman, who also died, police said.

The 28-year-old officer who ran into the line of fire to save others worked in the city's 2nd Police District and joined the department in 2017. Tuesday, he is being remembered as a husband and father of three young children.

Monday night, officers stood at attention as an ambulance carrying his body passed in a procession to the medical examiner's office.

Jimenez was shot and killed by the gunman inside the lobby of Mercy Hospital. He was responding to shots fired while he and his partner were on their way to a different call.

Police were called to Mercy Hospital at around 3:30 p.m. after a gunman confronted his ex-fiancee, emergency room doctor Tamara O'Neal.

The I-Team has identified the gunman as 32-year-old Juan Lopez. The couple's engagement was called off in September.

Lopez shot and killed O'Neal in the parking lot and then ran into the hospital continuing to shoot, killing a pharmacy resident coming off of an elevator who was just going about her business. She has been identified as 25-year- old Dayna Less.

Lopez exchanged gunfire with Officer Jimenez and other officers as he ran into the hospital. Jimenez was shot in the lobby. A second officer was also hit but the bullet hit his holster.

A Chicago police officer responding to the shooting at Mercy Hospital had a bullet hit his gun holster. The officer was unharmed.

"Those officers who responded today saved a lot of lives because this guy was shooting that poor woman who had got off an elevator. Had nothing to do with nothing and he shot her. There's no doubt in my mind that all those officers who responded saved a lot of lives because we just don't know how much damage he was prepared to do," said Chicago Police Superintendent Eddie Johnson.

The suspect was found inside the hospital with a gunshot wound to the head. Police said it was unclear how he was shot.

Meanwhile, flags were lowered to half-staff here at the 2nd Police District Tuesday.

The Chicago Police Memorial Foundation said that they will present Officer Jimenez's family with a check for $60,000 to help with expenses. The foundation also said they will take care of any education related expenses for his children.

Mercy Hospital is mounring an ER doctor and a pharmacy resident killed in a shooting at the hospital Monday afternoon.

The emergency room where the shooting took place is expected to reopen Tuesday, but there will be two fewer people going back to work.

Pharmacy worker Dayna Less was an innocent bystander shot and killed. She was a first-year pharmacy resident doing her clinical rotations at Mercy.

After the shooting she was taken to Northwestern Memorial Hospital. The 25-year-old was a graduate of Purdue University. She was planning to go home to Indiana Tuesday to be with her family on Thanksgiving. Dayna Less was also engaged to be married next summer.

The other victim, killed in the parking lot, police say was Doctor Tamara O'Neal. Dr. O'Neal was an emergency room physician at Mercy. A family member said she was engaged to the shooter for about a year, but called off the wedding in September.

"She was 38 years old, completely dedicated to her church," said Patrick Connor, chairman of the emergency department at Mercy Hospital. "She never worked on Sundays. She led her choir in her church and she fundraised every year for disadvantaged children for first, second and third grade children all their school supplies."