The property owner and the host of any large parties can each be fined $10,000 without any warnings first.
KFSN
By Jason Oliveira 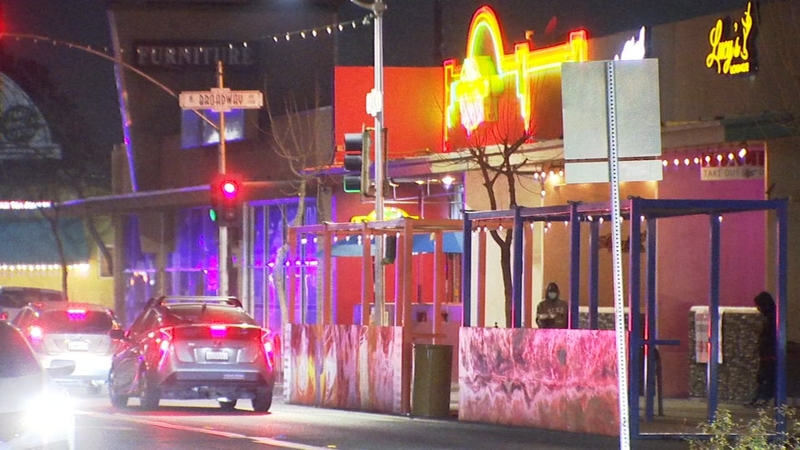 FRESNO, Calif. (KFSN) -- Party planners could pay the price for hosting gatherings for the new year.

The City of Fresno on Thursday announced emergency orders prohibiting mass gatherings. Under the orders, the property owner and the host of any large parties can each be fined $10,000 without any warnings first.

The city released the following statement:
"Given that hospitals are overwhelmed with COVID-19 patients, the City Attorney and Code Enforcement have been directed to enforce all emergency orders prohibiting mass gatherings, including any New Year's parties and similar gatherings. Owners of property where violations occur and promoters of these illegal gatherings will be cited as egregious violations, without additional notice or warnings, to the maximum extent provided by law."

The orders came after the Fresno City Council held an emergency meeting to discuss tougher penalties for New Year's Eve party organizers, among other topics.

City officials received dozens of reports regarding planned parties, despite them defying state orders. City officials were investigating many of the party invites that have recently circulated on social media.

The majority of the Fresno City Council voted to pass the emergency order just hours before the new year.

Their hope is that it will keep people from gathering and taking up beds at hospitals that are already being severely impacted.

Hospitals are overwhelmed with a surge in coronavirus cases now being tied to Thanksgiving gatherings.

City Council President Miguel Arias said the order will remain in place throughout the weekend, and fines will be given without a warning.

Parties to ring in the New Year are being planned across the Central Valley.

"We're flabbergasted by the fact that some individuals are still choosing to violate the state, local, and city order," said Arias. "If you're operating as a DJ or a host and you're hosting these parties in your property at your home for the purpose of making a profit way beyond your family gatherings, you should expect a $10,000 fine in the mail because we're on to you."

One post boasted - "People from up and down California and even out of state are expected to attend."

Another online flyer promised a full bar hosted by two DJs at an undisclosed location.

Fresno-area DJ Walter Olazaba, who was listed as one of the organizers for the 'End of 2020' party, said he was helping plan a New Year's Eve outdoor celebration in downtown Fresno, expecting the state home order would be lifted before the new year.

"I was never the host. It just says to contact me for info, so I was just trying to help out a restaurant," he said.

Olazaba said once state officials extended the order, the celebration was immediately canceled.

"I think the governor's right with this even if you don't agree. So we need to stay at home," he said.

A handful of local family entertainment centers are also defying the stay-at-home order.

No Surrender Adventure Park is offering holiday specials this week at its Fresno and Clovis locations. A representative for the business said they're taking steps to operate safely and are remaining open in an effort to stay afloat during these difficult times.

City of Clovis Community and Economic Development Director Andrew Haussler released a statement -- saying in part:
"Our focus at the City is to provide clear educational communications both on the restrictions and any resources businesses can utilize, while leaving enforcement to the agencies responsible for enacting the health orders."

Shane Brown with Fresno City Fire said they have 24 units, and expected all of them to be busy on Thursday night with calls for both medical reasons and fireworks.

He said if they get too busy, they'll be forced to temporarily stop medical aid response.

"If you call 911 and the engine down the street is responding to a call somewhere else, that's going to delay your call," he says.