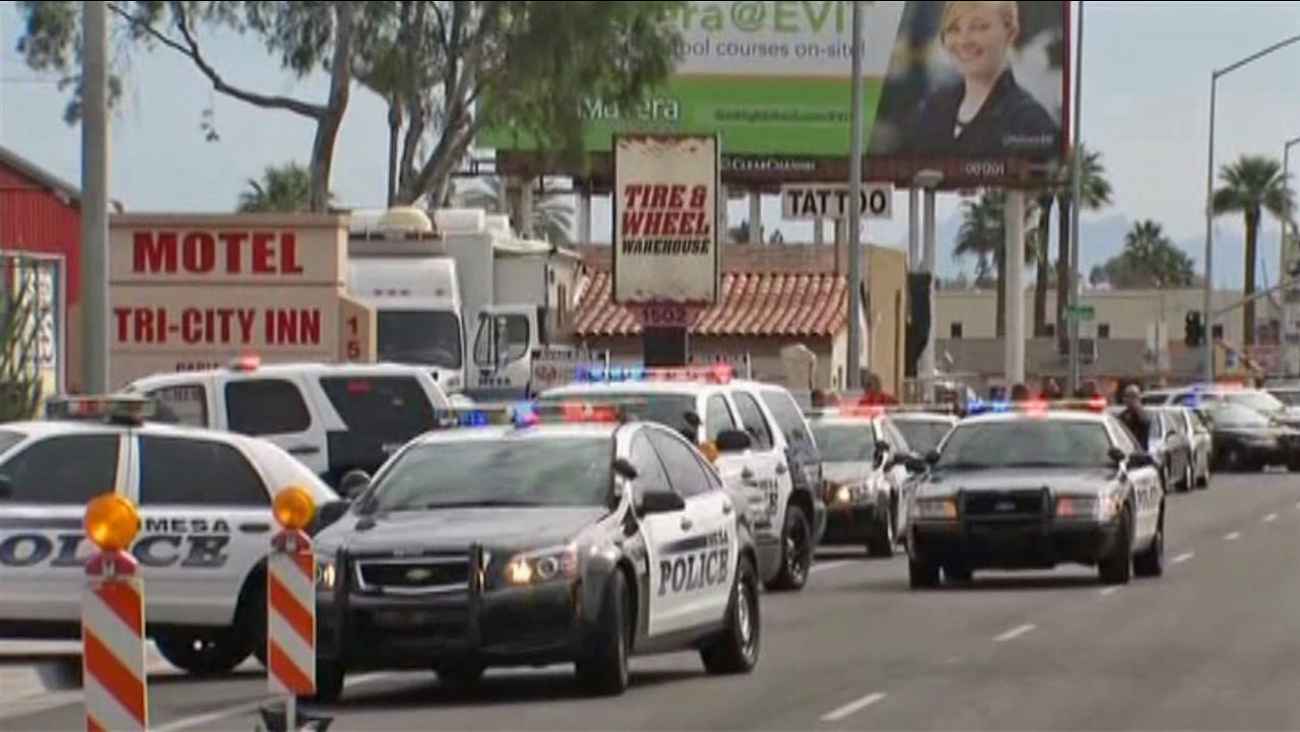 Mesa police are searching for a gunman in a shooting spree across the Phoenix, Ariz., suburb on Wednesday, March 18, 2015. (KABC)

MESA, Ariz. -- Police have arrested a gunman who is accused of killing one person and wounding five others across several locations in a Phoenix suburb.

Mesa interim police chief John Meza confirmed to reporters at the scene that the suspect was arrested. Police planned to announce more details at a 1:45 p.m. news conference.

Numerous officers led a handcuffed man to a truck parked on a street outside an apartment complex.

The rampage included a shooting at a motel, a carjacking and a home invasion at a nearby apartment complex.

A gunman killed one person and wounded five others Wednesday in a rampage that included a shooting at a motel, a carjacking and a home invasion at a nearby apartment complex.

The shootings prompted an intense hunt for the suspect as Mesa police searched the trunks of cars, interviewed witnesses and brought in SWAT and canine units from other agencies.

"If we have to go door-to-door, we will," Detective Esteban Flores said.

The incident started with an argument inside a room at a motel and spilled outside, and three people were wounded there, Flores said. The suspect then shot a person at a nearby restaurant and carjacked a gray Honda Accord. Two more people were wounded at separate apartment complexes, including one during a home invasion.

Police say the suspect is described as being in his early 30s or late 40s with tattoos on his head and face and wearing a black shirt and shorts. However, police said he might have changed his clothing.

Flores said people in the area should remain indoors and call 911 if they see someone suspicious. When asked whether local residents should be worried about the shooter, Flores said, "Absolutely, they should be really concerned."

Several locations in the area were placed on lockdown amid a heavy law enforcement presence, including police searching car trunks and interviewing witnesses. The Arizona Department of Public Safety sent its SWAT team to Mesa to assist with the effort, DPS spokesman Bart Graves said. Scottsdale police are also sending SWAT and canine units.

The shootings occurred near the East Valley Institute of Technology. Nearby Mesa Community College issued an emergency alert, saying its campus was on lockdown and anyone already there should proceed to the safest location. The shooting scene is also near a light rail line that travels through the metro Phoenix area.

Vinny Carbone owns an auto body shop near the shootings. He was getting ready to open up when he heard a man yell "help, help." He later saw a woman outside the motel with what looked like a bullet hole in her side.