Cat Haven in Dunlap evacuating due to Rough Fire; more than 103,000 acres burned

KFSN
By Brian Johnson
FRESNO COUNTY, Calif. (KFSN) -- The largest active wildfire in California only gets bigger -- now at more than 103,000 acres burned and 31% containment. It's caused the Fresno County Sheriff's Office to issue warnings for foothill communities in Fresno County, and Cat Haven in Dunlap to temporarily close its doors.

Cats big and small will soon be moved to a new home, as Cat Haven isn't taking any chances with the Rough Fire.

"I think the best thing to do is we'll probably just shut the Cat Haven down for a while here and then wait until this thing gets through and then hopefully we have something to come back to," said Cat Haven's founder Dale Anderson.

But foothill communities of Dunlap, Miramonte, and Pinehurst are only under evacuation warnings. Fire officials say that means be prepared to leave at a moment's notice, and maybe even gather some of your important belongings.

"If next week you didn't have to put those valuables in the car, and we laugh about it great," said Rough Fire Information Officer Andy Isolano. "But if the sheriff knocks on your door and says you have to go right now, I'd rather know I'm ready for that."

Isolano says there's currently a contingency line west of Hume Lake, and if the fire jumps that line, the evacuation warnings could turn into orders. The Grant Grove area of Kings Canyon National Park is also under an evacuation warning, although you wouldn't know it with the number of tour buses passing through. Though the Rough Fire has burned nearly 5,000 acres of National Park land, the giant trees are still standing.

And while it will be a logistical challenge to move them, and put stress on them, at least the 34 wild cats halfway down the hill will also be protected.

"We've had bad things happen in the past, we got through them," Anderson said. "It's one of those things where you know it kicks you in the teeth for a while but then you sit there and go 'Hey man it's time to man up and get some stuff done,' and so we'll get things done."

Anderson says his friends in the cat community and the Fresno Chaffee Zoo are stepping up to help him out during the transition.

Some of the cats will go south to the Los Angeles area, while others will stay in the Fresno area.

Tap or click the links to learn more about the Project Survival Cat Haven online and on Facebook. 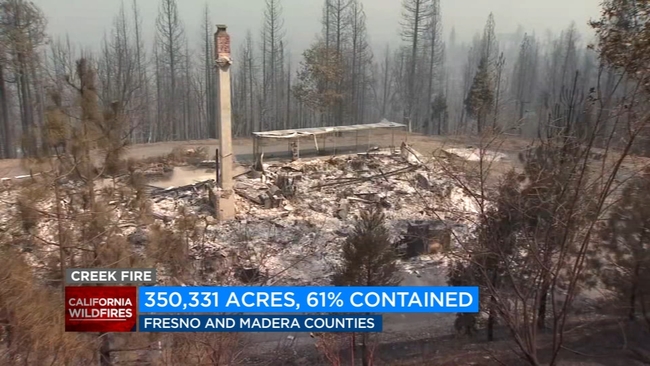 Newsom explains why you probably won't get a vaccine in 2020