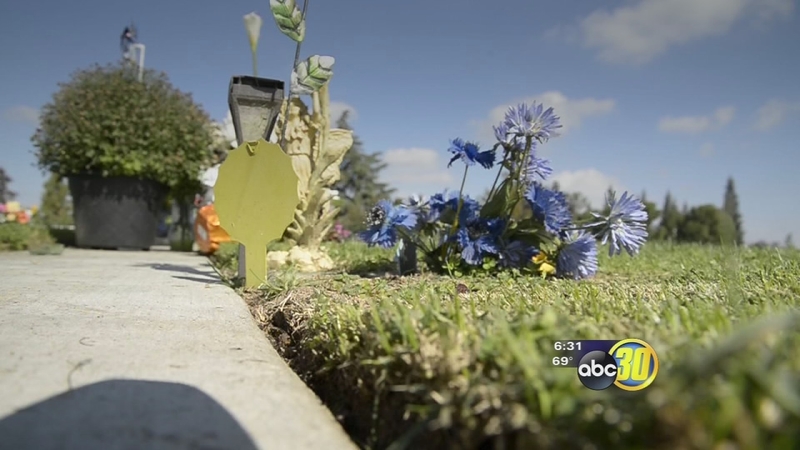 FRESNO, Calif. (KFSN) -- A Valley family, who recently lost their newborn, is begging a local cemetery to make good on a deal they made days after their baby boy died of a genetic disorder.

The couple wanted to buy the plots next to their baby, but when they went to pay for them they were told that they were sold. Cemetery officials say they feel awful about the mix up but the plot in question was already sold to another family before the Miranda family bought theirs. But the grieving family says sorry, it's good enough.

Aiden Miranda was born August 7th of this year. He weighed 7 pounds and 7 ounces and lived for a single day. "My son was alive for 8 hours. It was the best 8 hours of my life," said David Miranda, Aiden's father.

Aiden looked normal but Miranda knew his baby boy would only live a short time, because doctors discovered a fatal disorder even before he was born. The birth and death was very emotional.

Miranda made burial arrangements at saint peter's cemetery. At the time, he also reserved another plot for he and his fiance. He was provided a reservation slip that stated Miranda needed to make his first payment on the additional plot by November 17th. So earlier this week, he came to make a payment only to learn his plot was sold.

Carlos Rascon, Director of Cemeteries, said, "We are very sympathetic to the situation and the loss. We're trying to present and explore other options that will work for this family." The options include purchasing other plots near but not right next to their sons' or being buried in the same plot as their son. They also could move the baby to a place where plots are available next to him.

Cemetery managers said another salesperson sold the plot next to Aiden's just three days before the Miranda family came in, and although the sell was documented in the computer, it wasn't listed on the cemetery map.

The director of cemeteries said he is reviewing the policies to prevent this from happening in the future.
Related topics:
fresnobaby deathfamilycemeteryfresno
Copyright © 2021 KFSN-TV. All Rights Reserved.
FRESNO