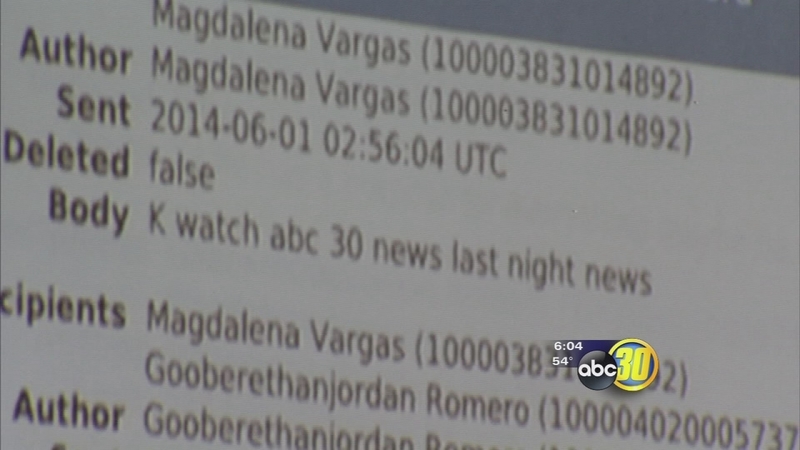 In the crashed car where police found the bodies of Joseph Blunt and George Duarte, investigators also found a cell phone. It was the first big clue after coroners discovered it was gunshots, not the crash, that killed the two men. The phone's owner was Eloy Romero, Jr., but he'd dropped out of sight, so investigators used Facebook to track him. "I'm kind of on the run, but we can go to a spot where I lay my head," said Facebook's Shannon Chance as she read Facebook communication from May 2014.

In court Tuesday, she read from the account of Gooberethanjordan Romero. Eloy Romero isn't conceding it was actually him who used the account. But former friends confirmed they were using it to communicate with the man identified as the double murder suspect in an ABC30 story two weeks later, a story Eloy Romero's friends made sure he knew about through Facebook messages to Gooberethanjordan Romero. "K watch ABC30 news last night news," said Chance, reading from messages to Romero's account.

Prosecutors say Romero killed Duarte and Blunt because they were associated with a gang he believed killed his mother, although doctors determined she died of either natural causes or an overdose.

Facebook posts show Romero left the Central Valley down to southern California and back before telling one friend he was going to disappear and stay out of touch. And while he never admitted to the crime -- at least in any message that wasn't deleted -- he did mention the effects the story of murder could have. "Got to make people feel fear when they say my name and how they talk to my fam," Chance read from a message investigators attribute to Romero.

Police eventually caught Romero at a home in Reedley. He told detectives he'd just found out he was wanted from his father, a special agent with the Department of Justice.