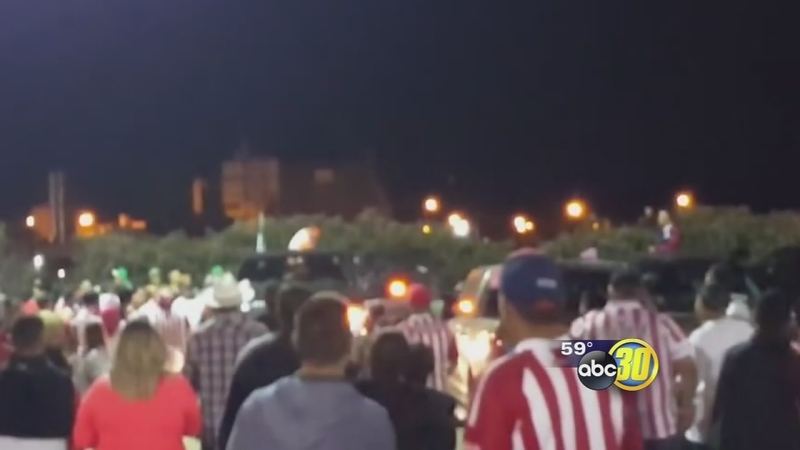 FRESNO, Calif. (KFSN) -- Inside Chukchansi Park Saturday night the pushes and jabs between Chivas and Leon did not just stop on the field. From the stands to the parking lot, the rivalry continued among the fans.

Genovene Rocha and her family were among the crowd who felt the wrath.

"We're all a family of Latinos, and here they are attacking each other, just because their team lost."

Genovene said her husband and son were celebrating a Leon victory. Waving a flag on their truck when a few Chivas fans ordered them to take it down. The family refused and police said that is when the crowd attacked.

"They broke a bottle on his head... He can't open his jaw well so he's got to eat only foods like soup because he's in pain opening his mouth," said Rocha.

Fresno police said they had 25 officers present. The venue itself had more than 30 security officers. But the victims' family said none of them served their purpose that night.

"To see what a waste, what a waste, and what security in that stadium because we were in the parking lot where there was security. When did it get out of their control? When did all this happen? They don't have the sufficient security to take care of the people. This is a tragedy," said Rocha.

The police department said these exhibition soccer matches have ended with assaults before. They try to assign as many officers as possible but with 10,000 people leaving the stadium keeping the peace is a challenge.

"You know, that many people along with alcohol being served and drank, certainly you're probably not gonna end up having with not having a disturbance. In this case, unfortunately, it lead to an assault. We did have officers outside to deal with it quickly," said Lt. Mark Hudson, Fresno Police Dept.

Rocha said luckily the family will recover from bumps and bruises, but she hopes someone knows the men involved. And for families to understand the risks of attending a game.

Fresno police said there were no other reports of crime that night and that the assaults that happened in the past, were all minor.
Related topics:
fresno downtownchukchansi parkattacksoccerfresno
Copyright © 2021 KFSN-TV. All Rights Reserved.
FRESNO
Valley companies look to hire, experience work shortage
George Lopez to bring comedy show to Fresno
Dozens help clean up at Camp Fresno
Bakery in River Park celebrates grand opening
TOP STORIES
Merced teacher back home after battle with COVID-19
Looking back at the ups and downs of COVID in Central CA
24-year-old man shot in southwest Fresno, police say
What changes throughout Central California as state reopens
CA has reopened, but not everyone can go maskless
Suspect involved in standoff in Kings County identified
19-year-old arrested on arson charges for NW Fresno fires
Show More
What to expect from CA's reopening today
Newsom picks 10 winners of $15M to celebrate reopening
1 killed in shooting on Hwy 99 near Merced
Valley doctors discuss California's reopening
Valley travel industry shows signs of rebound as CA reopens
More TOP STORIES News