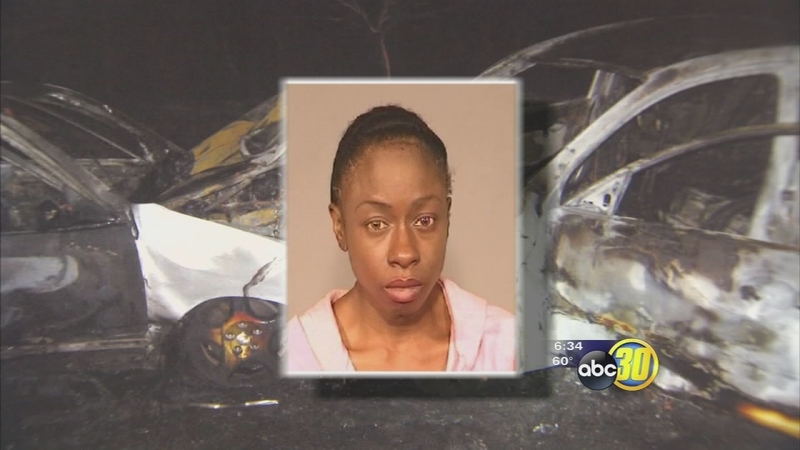 FRESNO, Calif. (KFSN) -- The fiery crash that killed a state correctional officer, bloodied his young son, and injured a few more people is now at center stage in a Fresno criminal court.

Vikki Robinson walked into court Friday with a fight on her hands. She's not denying she crashed her Lexus into Arthur Lara's Mazda, killing the 31-year-old father and correctional officer. But her attorney, Micha Rinkus, says there's no evidence Robinson was drinking, or on drugs, or even suffering from a sleep disorder on that night in March 2013. She says it was just an accident. Prosecutor Kenneth Jenq says it's manslaughter.

They say she had just passed a couple cars by driving into opposing lanes of traffic on Highway 43 near the Fresno-Kings County line. When she tried it again, she knocked a pickup truck upside-down and into a power pole, then smashed head-on into Lara's car. Prosecutors say she was speeding, but ABC30 legal analyst Tony Capozzi says they don't have to prove it. "I think you have to show there's some kind of traffic infraction here," he said. "It looks pretty clear if she's driving on the wrong side of the road and hitting someone else, sideswiping someone and hitting someone else head-on, on the wrong side of the road, there's clearly a traffic infraction here."

The judge wouldn't allow our cameras in court yet, but one witness described seeing Lara slumped over in his seat, then pulling his 3-year-old son Isaiah out of the child seat in the back as the car was on fire. Another car had hit Lara from behind after the head-on collision and Robinson's attorney says that may have contributed to Lara's death. Capozzi calls that a thin argument. "The defendant crossing over the median line and driving on the wrong side of the road and hitting someone head-on, she's the proximate cause of the death no matter what else happens in the case," he said.

The charge is a misdemeanor, so Robinson is facing at most a one-year jail sentence if she's convicted. She has settled lawsuits from the drivers in all the other cars involved, as well as Lara's family.