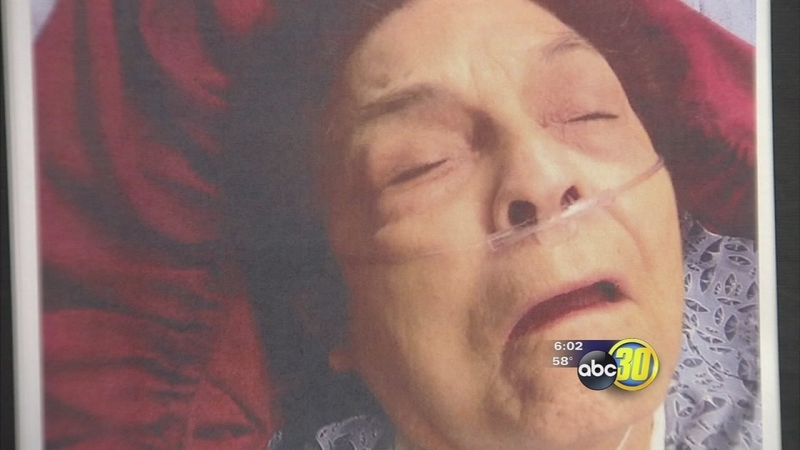 FRESNO, Calif. (KFSN) -- A grandmother nearly 80 years old has filed a lawsuit against Clovis Unified claiming she was manhandled by an officer and left with more than $180,000 in medical bills.

Mary Poole was dropping off treats last year at Kastner Intermediate School. She says the Clovis Unified police officer asked her to leave because of a court order against her. But what happened after that... Is what she feels was excessive and unjust.

Court documents claim the officer sprayed pepper spray in the woman's face twice during a confrontation in front of the school. She ended up with a dislocated shoulder and fracture, and pain she says is just now starting to subside.

Poole says she had nothing but good intentions last April, when she showed up at Kastner Intermediate to give her granddaughters baked treats after school. For several years, she was the guardian of her son's daughters, but a custody dispute between their parents left her unable to see the girls.

She was waiting at the door of a classroom, when Poole says an officer told her there was a restraining order against her and she had to leave. Poole claims she left campus but pulled over in front of the school on First Street.

"He wouldn't listen to anything I had to say, period," said Poole. "Every time I tried telling him anything...I mean, I was even telling him, 'I'm 78 years old,' before he grabbed me. He sprayed me with mace twice."

Poole says she was on the phone with her son, explaining what happened, when the officer became confrontational.

"And I was very frightened, and I told him to call the police and he said, 'I am the police,'" said Poole.

From there, the elderly woman claims he got physical.

"He jerked me out of my car with my left arm with such great force, and then threw me onto the pavement. From there he dragged me by my left arm up to the school grounds," said Poole.

According to a lawsuit filed Monday, Poole is suing Clovis Unified claiming everything from excessive force to elder abuse to assault and false arrest.

"The amount of force it took to inflict these injuries is testament to what happened that day," said Mark Coleman, Poole's attorney.

Poole stands less than 5 feet and about 110 pounds. Her attorney claims the officer should have had the training necessary to handle this situation. In the end, Poole was never arrested, and there was not a restraining order against her.

No monetary amount is listed in the lawsuit. Clovis Unified would not comment on the suit since administrators have not received it yet. But, the officer still works for the school district.