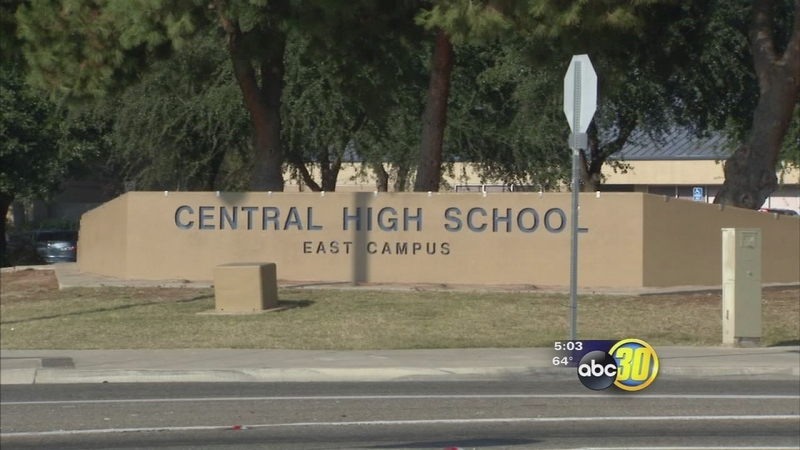 FRESNO, Calif. (KFSN) -- For the second time in seven days, a robber targeted a student from the Central High School East campus. And police believe the same person is responsible for both attacks.

The latest robbery happened in this neighborhood Friday morning. A teenager says the suspect had a bandana covering his face and a gun in his hand when he stole a gold chain right off the victim's neck and ran away. But exactly seven days later, the robber appears to have struck again. "This is obviously alarming not only for the students who walk to the school but for parents," said Sgt. Jamie Rios of the Fresno Police Department.

Several parents told us they are very concerned.

Police say a student walking to school was the victim this time, and the crime seems very similar. Both victims say their attacker was between 18 and 22 years old, about 5'6" or 5'7" with a bandana over his face. "When I hear all these robberies going on, I'm afraid that maybe my son will be next and as a dad, that brings a lot of fear in me," said Mario Carrillo, whose son goes to Central and walks home from school to the neighborhood where the most recent robbery happened.

Fresno police have increased patrols around the school to protect the students, and they're looking for clues leading to the suspect they believe carried out both robberies. They've noticed a connection between the victims, too. Both are Sikhs, so investigators will look into whether the crook is specifically targeting members of that community.

Some students told us the robberies are frightening for them all, but they feel good about campus security and these crimes could really happen anywhere. "Central's a good school, believe it or not," said Elliot Gallegos, a senior. "Don't let the robberies affect your picture of what it could be and what it is."