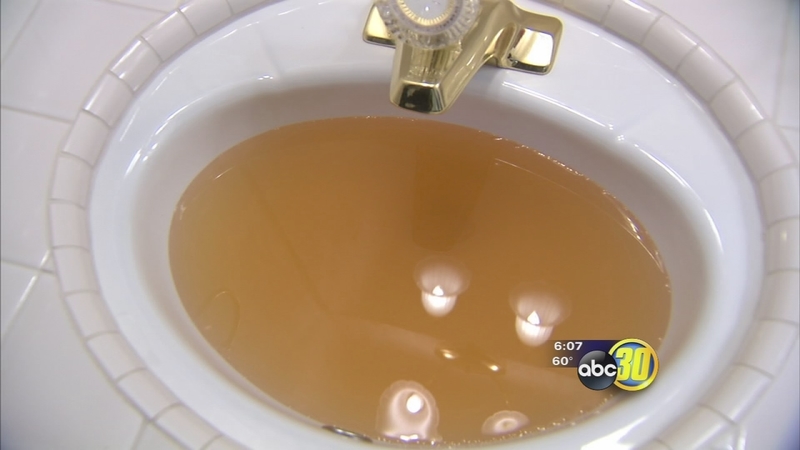 FRESNO, Calif. (KFSN) -- Turn on the faucet in this home in the Fort Washington area of north Fresno home and this is what you get -- orange colored water.

Jeanette Grider says she thought it was her plumbing until she learned online from the Nextdoor App that other people scattered around north Fresno were having the same problem.

"When I asked the question does anyone have a rusty water problem, I figured everybody was gonna say no, and I started getting back all these things saying we have it too."

She said the water usually clears up after running for a few minutes. Jeanette has a filter on the water that comes into her house and it's rusty red. Some of her neighbors have a similar problem, but others say their water is clear.

The man in charge of Fresno's water system, Thomas Esqueda says he has heard from about a dozen residents with the issue.

"We've received complaints from some folks in the north part of the service area about red water concerns," Esqueda said. "We've reached out to them and trying to get a set of them to agree to participate in a sampling program. "

Esqueda says water coming out of the city treatment plant and wells is testing as safe to drink, but he doesn't know why some homes have orange or red tinted water.

"So its really too soon to be speculating what's causing it until we get out there," Esqueda said.

The city plans to begin testing each affected home over the next two weeks. In the meantime, a similar problem has been reported in Clovis.
But Assistant Public Works Director Lisa Koehn says the city knows why. "Its just organics that are in the water naturally occurring things like leaves and stuff like that that's causing the water to have some color," she said.

This time of year both the city of Clovis and the City of Fresno tap the water from the Kings River. The heavy rains have pushed more debris into the water. Koehn says all the bad stuff is filtered out, but some color remains. "It shouldn't cause any issues it shouldn't stain or anything like that, he said."