Search continues for Fresno couple who allegedly abducted own child 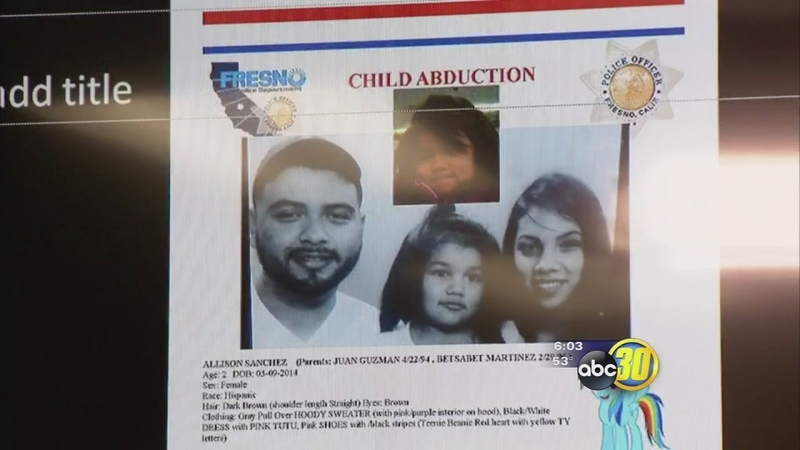 Search continues for Fresno couple who allegedly abducted own child

FRESNO, Calif. (KFSN) -- The hunt is still on for two Fresno parents, 22-year-old Juan Guzman and 20-year-old Betsabet Martinez, who allegedly abducted their own child.

Fresno police believe the young couple abducted their two-year-old daughter Allison Sanchez early Saturday morning. The toddler was sleeping in a pink tutu and gray sweatshirt and was in the care of her aunt.

"At approximately 7 a.m. she did not hear Allison make noise as she normally would in the morning and went inside and determined Allison was, in fact, missing," Police Chief Jerry Dyer said.

Police say this all goes back to one week ago when they were dispatched to the parents' home. Neighbors reportedly heard gunshots. And after officers arrived, they found guns, shell casings, and scales for weighing drugs with residue on them.

That is when Allison was taken out of her parent's custody by Child Protective Services and her grandmother was given custody. Neighbors say they have not seen the family since late Saturday.

One neighbor who did not want to be identified says she remembers a few incidents in the past where police were sent to the home. However, she does not recall the most recent one.

"I didn't hear any gunshots that day of the altercation or whatever happened that occurred on the eleventh," she said.

She is wondering though if an Amber Alert will help law enforcement catch the missing child.

"As a mother, I'm thinking if CPS took the child away for weapons there must be some type of danger or concern for the child," she said.

And that neighbor says she did not even know the couple had a child, and, in fact, she hardly saw them. And when she did, they never spoke. As to why an Amber Alert was not issued, Dyer says it's because they have not established that the child is in immediate danger.