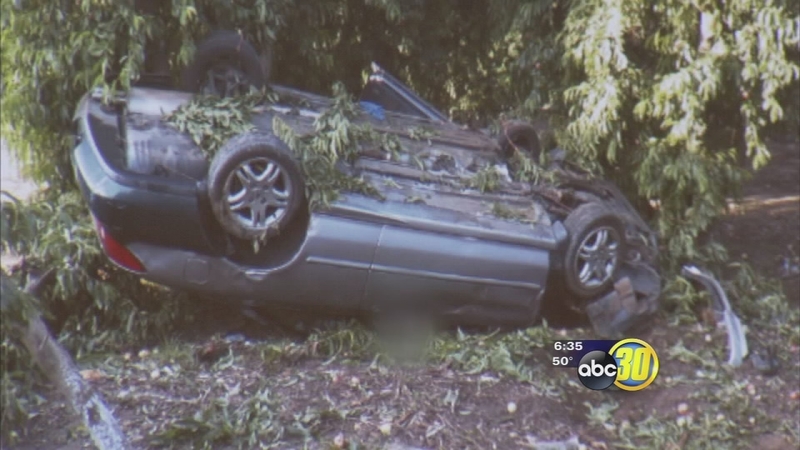 FRESNO, Calif. (KFSN) -- The double murder trial continued Monday in the case of a man accused of shooting two people execution style. Investigators believe the shooting caused the driver to drift off the road and crash into a nectarine orchard.

Eloy Romero Jr. is accused of being a back seat passenger who shot and killed George Duarte and Joseph Blunt then managed to make it out of a mangled car, seemingly unhurt. Monday, the CHP officer investigating the traffic collision said it is possible other passengers could have a wide range of injuries, including none.

Officer Benito Munoz testified the car appeared to have drifted off the road before it overturned and slammed into an orchard. There were no skid marks or attempts to stop the car, which was traveling around the 55 miles per hour speed limit, crashed. Munoz said when he arrived the victims were seat belted in the car and he did not notice gunshot wounds to their heads. "I wasn't able to see that head injury from the way they were positioned when I got there."

The deputy coroner who handled the case also told the court she collected two cell phones from the car along with the victim's wallets. She was notified of the trauma the doctor discovered during the forensic examination. "As he was doing Joseph Blunt's autopsy, he discovered that he had a bullet wound to the head," said Loretta Andrews, Deputy Coroner.

Romero is accused of killing the victims because he felt the gang they have ties with, the Norteno Gang, caused his mother's death.

After the crime, he was on the run for a month until authorities caught up with him.