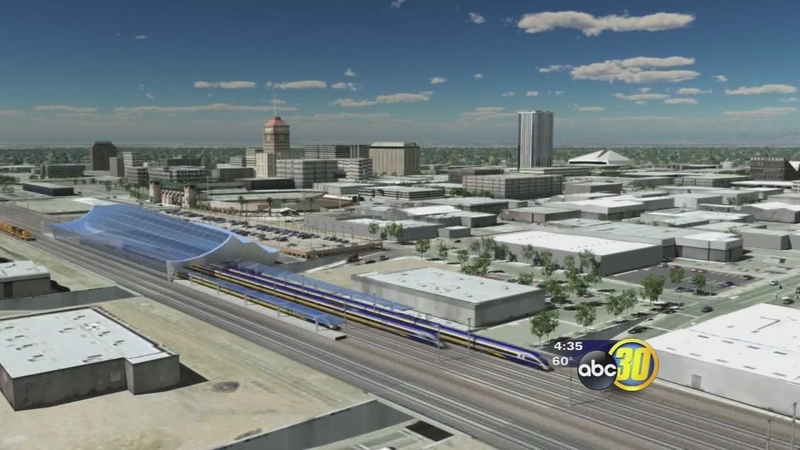 FRESNO, Calif. (KFSN) -- Several hundred acres of land just south of Fresno is seen as a prime location for a heavy maintenance facility to assemble and maintain California's High-Speed Rail system, once it's built.

But the site has many different owners and Fresno County Supervisor Henry Perea is among those who felt getting options on the land now would be a good way to improve the chances of getting the High-Speed Rail Authority to locate the maintenance yard in Fresno County. "We really do believe Fresno County is in the top spot, this is just one more icing on the cake to make sure we were ready to go in case we are selected."

But the icing came with a potential price tag of $750,000. A local developer, attorney Tim Jones, offered to put the money up, and secure the land, but wanted a guarantee he would get his money back if the High-Speed Rail authority decided to pick another location for the maintenance yard. Supervisor Andreas Borgeas questioned the idea. "If you were in a position to vote for $750,000 before the site is even selected, would you support the use of that money knowing it could be lost."

The consensus was no. The money would have come from $25-million in Measure C transportation tax funds that have already been set aside for High-Speed Rail. But those funds won't be spent unless Fresno County gets the project. A decision on where the maintenance facility goes is expected in May.
Supervisor Perea believes Fresno County still is in the lead, but Kern County already has the land ready to go.

"We know that Kern County has their site completely assembled and purchased which is an advantage for them but it is not the right location, so we win on location and we win on preparation where we needed to strengthen our proposal was on the area of having the land assembled and ready to go.
But it's not a place we can't get to it's just going to cost us a little more money to get there."

Because, Perea believes the property owners may not be able to raise their price.

The Supervisors discussed the matter during a special meeting on Tuesday. They were anticipating the Fresno County Transportation Authority would act on the proposal to guarantee the developer's investment at their meeting on Wednesday. But the issue was removed from the Transportation Authority agenda at the last minute.
Related topics:
politicsfresnofresno countyfresnofresno city councilhigh speed rail
Copyright © 2021 KFSN-TV. All Rights Reserved.
FRESNO