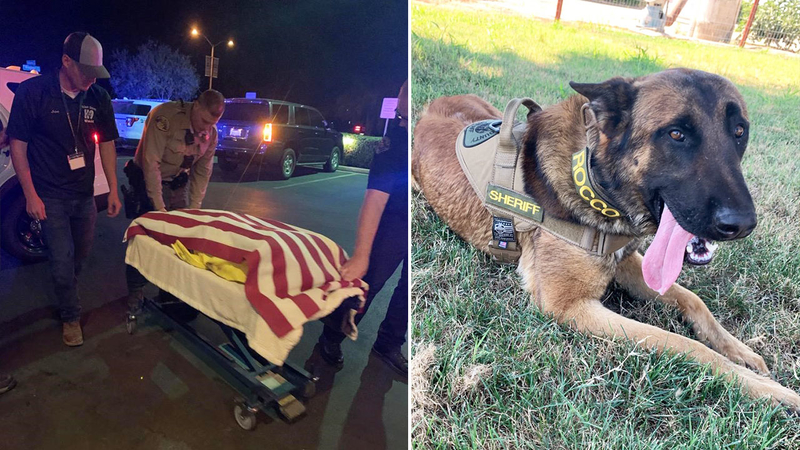 Neighboring agencies helped block roads and escort Rocco to the veterenarian's office, where deputies and handlers waited to get one last glimpse at their fallen comrade.

"I know that his handler was with him after that and just very distraught," said Ashley Ritchie of the sheriff's office.

On Wednesday night, Rocco's handler took him out for a bathroom break near Avenue 328 in Visalia.

But during the stop, a rabbit ran out in front of the one and a half year old Belgian Malinois.

The K-9 deputy chased the rabbit into the road when seconds later he was struck and killed by a car.

"These handlers and their K-9 partners, they're family. They spend more time with them, a lot of the time than their actual family so this is like losing a family member," said Ritchie.

Rocco was delivered to his family in June of 2018 where he went through a rigorous 8-10 weeks of training to be a K-9 deputy.

He was deployed as a Tulare County Sheriff's K-9 deputy in May of this year.

"When you lose one of them, you lose a member of the department. It's just like losing one of your own deputies. They are sworn members of our department as well. We all feel it very deeply," said Ritchie.

Purchasing the dogs and training them costs departments anywhere from $10,000 to 20,000. That cost rises as their training and standard of health need to be maintained - so the department relies heavily on donations.

Though they're expensive assets, their service is invaluable.

"Their sense of smell, detecting drugs, bombs, any kind of contraband, their loyalty, their ability to apprehend a suspect...," said Ritchie.

The Tulare County Sheriff's Office K-9 unit has been in place for more than 35 years - and was the first of its kind in the county.

They're still in the process of planning a funeral service for Rocco.