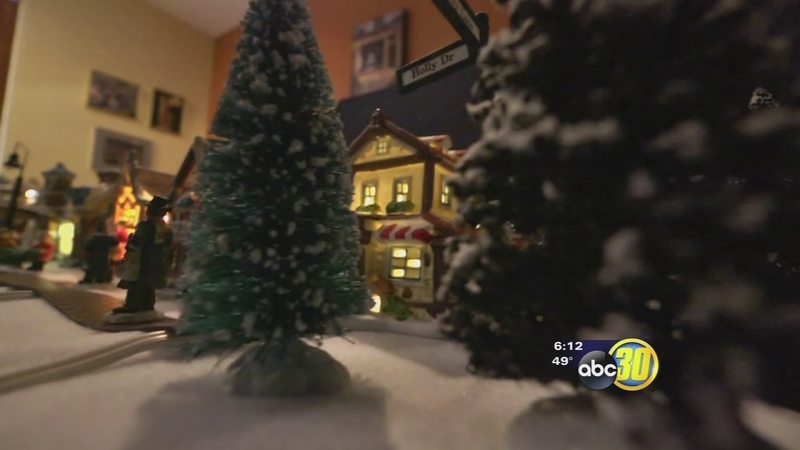 CLOVIS, Calif. (KFSN) -- The village is full of well-lit homes which help add warmth to the display. It is a bustling neighborhood full of people.

"I love it. I have little scenarios. I go and move people and animals and I really have a good time with it," said Cathie Holt, Clovis.

Holt's mother used to have a skating scene under the family tree. Holt is just continuing the tradition-- though she has taken it to the extreme. Some of the scenes, like one with a band, are very personal.

"My grandmother lived in an apartment house and across the street the Salvation Army band always played, so that was perfect. It was a memory you know."

Others depict the neighborhood where Holt grew up in New Jersey and bring back memories of having fun on the slopes during the winter.

"I leave it up a long time. I started in November and I don't take it down until February. It's a like a little girl playing dolls and I come in and move people around."

It all started with a tiny cardboard village-- then Holt started to collect. Then people started to give her gifts. Then new areas had to be arranged.

"The platforms got to be extended because my daughter-in-law bought me a lighthouse so I had to have a bay or an ocean."

One of Holt's sisters set her up with an English village, complete with a pub with a blue light to let you know it was open.

Holt bought a piece while in England a few years to complete the scene.

Holt has decided you can have too much of a good thing. She stopped buying houses for the holiday display but sometimes she has to add more people to Main Street or Park Avenue.

"I'm not going to go any further because you couldn't get in to see it."

Long after Christmas, in February, the village gets packed up and Holt and her husband get their library back.

Holt tells us sometimes her son-in-law would add gargoyles or space aliens to the display to see if she would notice.