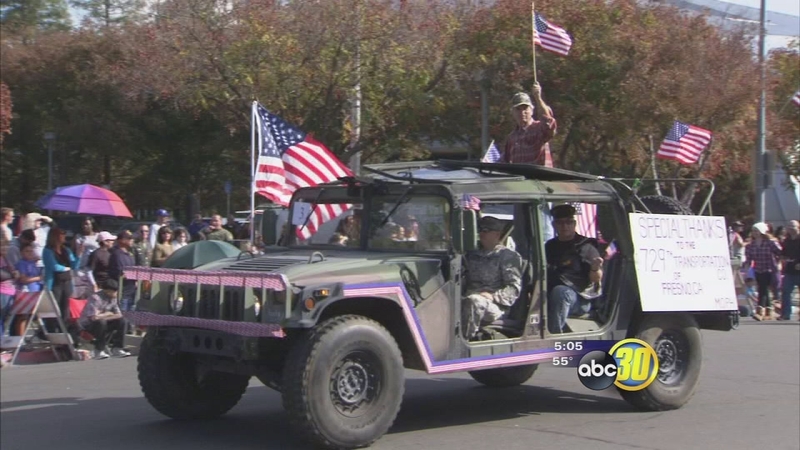 Spectators along the downtown route were treated to sunshine and warm conditions. No doubt the veterans could also feel the warmth from a very appreciative crowd.

Fireworks and a flyover preceded the parade which brought waves of patriotism from the thousands of people who lined the streets. Suzette Ihara of Sanger said, "I really think they deserve so much more and I wish I could go out and shake everybody's hand but just sitting here I think, showing my respects to them."

The Fresno State marching band raised spirits but so did the sight of members of the various armed forces riding the Veterans Day Parade route. Some valley veterans were overcome with emotion. US Army veteran Frank Collins said, "It's tearful. Strangers have come up to give me flowers, given me cards, given me shirts. It's quite the honor to be respected for something I did."

Massive military machinery drew "oohs" and "ahs" from the crowd. Some vets rode in style while others walked the route. US Navy veteran Clifford Dorsey enjoyed, "Watching the various military that comes along but also seeing the various veterans watching the parade and just greeting them and thanking them for their service."

Vietnam War veteran Al Jones was moved to see the response here was so much different than when he came home in 1968. The US Air Force veteran recalled, "I mean I was spit on and everything else when I come home so it means a lot to be out here and be proud to be a veteran."

That pride extended to the younger spectators who understood the role veterans have played. 12-year-old Edgar Lopez of Sanger explained, "Well they served our country and that means a lot."