UC Merced students are trying to return to normal 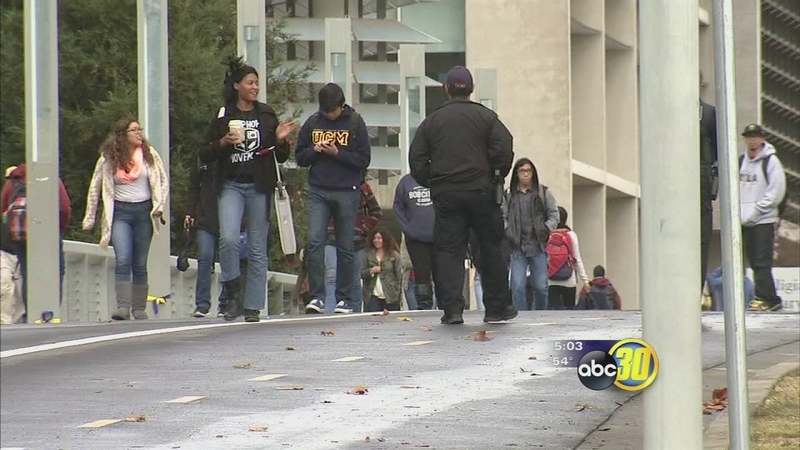 UC Merced students are trying to return to normal

MERCED, Calif. (KFSN) -- UC Merced is working to create a new sense of normal on the campus just days after a student stabbed four people before being killed by police.

The investigation is progressing, but on the campus the focus is really on healing and moving forward. Administrators say some students did go home for the remainder of last week after the attack on Wednesday, but it appears attendance is already back to normal. Some students returned to UC Merced on Monday for the first time since the attack that shocked this young campus. "I see students now living their daily lives, going to class, going to their rooms, but I think on the inside many of us are still hurting," said Angel Ramirez, UC Merced student.

Of the four victims, only one remains in the hospital-- student adviser Danielle Quiroga. She suffered a collapsed lung after being stabbed in the chest and back. On Sunday, she updated her Facebook photos to show images of strength and love for UC Merced. "We're told she will make a full recovery, fortunately," said Brenda Ortiz, Senior Public Information Representative.

Ortiz said counselors and police officers from other UC campus are now here to help make students, staff, and faculty feel safe and supported. "It is a tremendous help to have the additional resources on the police side of it, as well as the counseling side of it, and we've had an outpouring of support not only from our UC counterparts in Oakland and sister campuses, and we're so grateful."

Meanwhile, the investigation continues into the freshman accused of trying to kill his classmates. The attacker, 18-year-old Faisal Mohammad of Santa Clara, died on the scholars lane bridge after being shot by a police officer. Authorities believe he was angry about being kicked out of a study group, but they are still uncovering new evidence. "In light of some recent information we received late Saturday, I have taken that information and passed that on to the FBI, and because of that information the FBI will now be assisting UC Merced police department in the investigation pertaining to our assailant's background," explained Sheriff Vern Warnke, Merced County.

Sheriff Warnke said he cannot comment on what that information is because of the ongoing collaboration with other agencies, but his detectives are still leading the investigation into the officer-involved shooting. "We're completing the O.I.S. on this case, and we fully expect to submit that to the district attorney by the end of this week."