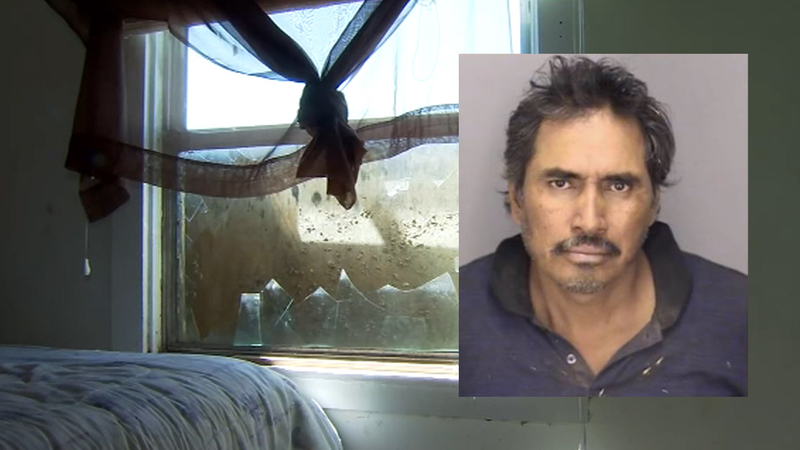 The woman who lives there told Action News she was behind the door when Guadalupe Lopez-Herrera tried to shoot and kick his way in over the weekend.

She says the 51-year-old was coming after his wife, who was staying with her at the time. The woman says he repeatedly hit his wife with a gun and even fired into the bottom of the closet where his own children were hiding.

"Just knowing the kids were in the house when this was going on when he was assaulting his wife, when he had this gun and was shooting rounds off inside the house that right there just goes to show you that this guy didn't care about anybody but himself," said Merced County sheriff's deputy Daryl Allen.

Court documents show Lopez-Herrera was arrested back in January after his wife reported he pushed her against a wall, grabbed a knife, and threatened to kill her. He was already on probation for assault with a deadly weapon at the time. He was sentenced to 45 days in jail and 3 years of probation.

On August 7th, a warrant was issued for his arrest and his probation revoked after another domestic violence investigation.

"He's got a very long history of domestic violence against him. Just violence in general," Allen said.

The Sheriff's Tactical and Reconnaissance, or STAR team, was following up on the latest assault case when they tracked Lopez-Hererra to this house in Dos Palos on Wednesday.

Investigators say he opened fire, hitting a sergeant in the vest and leg.

After the sergeant was shot through that fence, he used an irrigation ditch to get out of the line of fire.

The couple living nextdoor heard the gunfire and then saw the sergeant being checked out by his team in their backyard. They had spoken with him before the operation began and say he even came back to their home later that night to let them know he was OK.

Lopez-Hererra was arrested after a pursuit from Paso Robles to Kettleman City the next day. He was charged with 11 felony counts including attempted murder and domestic violence.

"I can tell you from the sheriff's point of view and also from that sergeant were happy this came to the ending that it did," Allen said.

Lopez-Herrera is being held without bail.