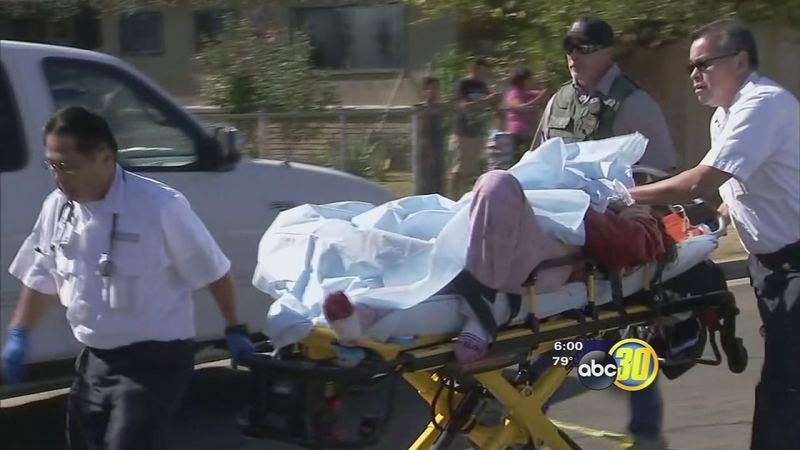 FRESNO, Calif. (KFSN) -- Doctors have delivered a baby to a mother still fighting for her own life. She was the victim of a shooting for which her husband is under arrest.

Fresno Police Chief Jerry Dyer said Manuel Servin had a death wish and no remorse after shooting his wife in the head.

"This individual had made up in his mind that after he shot her that he was either going to die that night or shoot some police officers."

Dyer said Servin fired 13 rounds from a handgun while high on meth before SWAT officers stormed the home he was hiding in. None of them were hit, but a robot that was sent in to communicate with Servin was.

Dyer said Servin was disoriented by flashbangs and was found, face down on the floor of a bedroom with a handgun by his side. His wife was in the same room, also on the ground and she was rushed to the hospital.

Doctors delivered the baby and Dyer said she will be okay, but the mom, who was seven months pregnant, is in grave condition.

"We do not know how long she is going to survive but the medical professionals are doing everything they can to keep her alive."

As for the motive-- Dyer said there was an argument leading up to the shooting. Servin also has a history of domestic violence-- according to court documents he abused his wife last year and was sentenced to anger management classes.

"When people are in a domestic violence relationship, it never gets better, it generally gets worse."

For this, Dyer said, Servin should spend the rest of his life in prison.

"What he did was unthinkable, unforgivable."