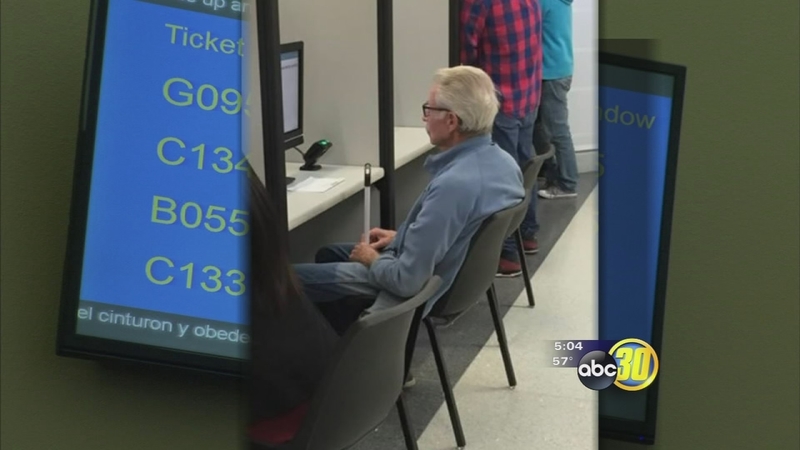 FRESNO, Calif. (KFSN) -- He's 82 years old and says he's been driving since he was 12. So when Vern Kerr went to the DMV office in Fresno to take his driver's license test, he didn't expect any problems. But his daughter, Angie who accompanied her Dad saw trouble was coming.

"I looked around and saw everybody was on computers and I thought oh my goodness, he's not going to be able to do this like this. "

Angie says she asked the DMV clerk if her Dad had to use a computer. "And he said, yes, it's mandatory it's our new system we want people to learn it, if he fails then we will let him take it in the paper form, and he said, but he has to try it. "

Vern says he told them he preferred a written test. "I wanted to get the written test so I could read it and know what I was doing."

But feeling he had no other choice, he tried the computer test. Which basically involves touching the right answers on a monitor. But Vern was stumped. "I know how to operate my DVD and VCR recorder and I thought it would operate the same way and it didn't, when I pushed a button he said I pushed it too hard when it didn't go to the next stage and he showed me how to punch it and I did it different ways, could have been something wrong with it, I don't know."

Angie watched her Dad grow frustrated. She snapped a picture of him at the DMV. "I felt bad for my dad, I felt bad for him a lot."

Vern says he just gave up the computer.

After we contacted the DMV, their spokesperson Jessica Gonzalez issued a statement. "We apologize to the customer for the misunderstanding we encourage all customers to use the touch screen test but offer them the written exam if they are not comfortable with the touch screen.

Vern said he isn't one to make trouble, and while frustrated by the hassles of modern technology, he wasn't upset with the people at the DMV. "I was treated real good down there by everybody. "