Deputies expected the return to be a difficult one, and had mental health professionals on standby.
KFSN
By Jason Oliveira, Sara Sandrik and Vanessa Vasconcelos 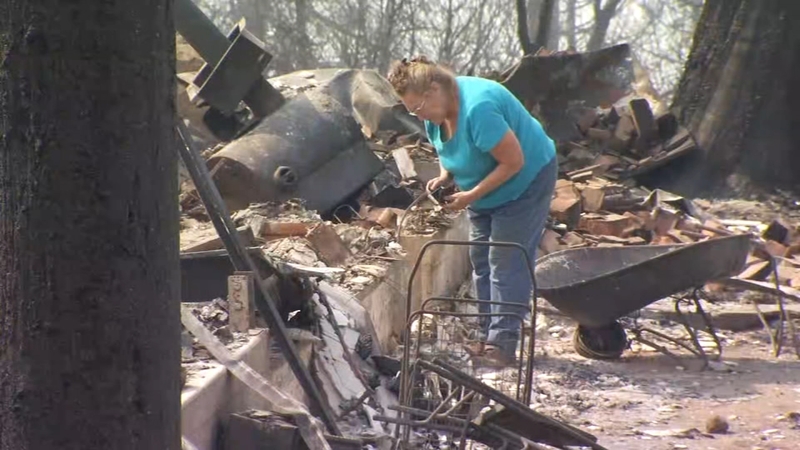 FRESNO COUNTY, Calif. (KFSN) -- It's been an emotional three days for dozens of families who have lost their home to the Creek Fire.

They were allowed to see their burned properties for the first time.

On Tuesday, Wednesday and Thursday, designated groups of residents were given the opportunity to go in and survey the damage to their properties - literally sift through the ashes.

Brian Barron was one of those who visited on Wednesday. He had owned a cabin near Shaver Lake for the past 15 years that was filled with irreplaceable items.

"My wife is still struggling more with it because it was all her mom's stuff, all of the memories, all the photo albums, all of her memories now they're really gone," he said.

Barron's journey up the 4 lane took him past charred trees and ravaged remnants of homes and businesses. Seeing his charred home was difficult.

His property was still smoldering in some spots. Some small metal wind chimes were still hanging from burned tree limbs, but nearly everything else was destroyed.

Barron said he's most heartbroken for his friends and neighbors who lost their primary homes and for the landscape that will take decades to recover.

"The whole drive, coming up through Alder Springs, the destruction, it's catastrophic," he said. "Our Sierra is gone, our Sierra is gone, and we won't see it back the way it was when we grew up here and that's kind of hard."

On Thursday, Ron Heitzman helped his sister-in-law Teresa sift through the rubble she and her husband Tom once called home.

"He (Tom) built this all with his hands. He had construction people from Shaver-Auberry area help him build it about 25 years ago," said Heitzman.

"This would have broken his heart to see all of his projects burned and destroyed like this."

Ron's brother lost his battle with cancer in May this year, leaving behind his wife, daughter, and granddaughter who are now trying to salvage what they can.

While house insurance will cover some of the damage, there are things that can't be replaced, like the peaceful view from the backyard.

A GoFundMe to help with living expenses is already halfway to meeting its goal. Too upset to speak on camera, Teresa says the community support inches them closer to rebuilding.

"We're going to pick up put one foot in front of the other, that's what we do," said Heitzman.

The family grabbed what they could while being evacuated. One of those items was the urn carrying Toms ashes.

The Fresno County Sheriff's Office said it wanted to let residents get a chance to go through their properties.

Over the next two days, people living off Auberry Road between Pinecone Road and Highway 168 will be able to see their property if it's been destroyed by the Creek Fire.

"We wanted to give them the one opportunity to actually set their boots on the ground, sift through what they can on their property and salvage any items they might want," said Tony Botti with the sheriff's office.

Deputies expected the return to be a difficult one and had mental health professionals on standby.

"Having to rebuild from the ground is truly traumatic for people," Botti said. "This is literally everything they own for many of them."

Residents haven't been allowed back since they were forced to evacuate more than 2 weeks ago, and the area remains under a mandatory evacuation order.

At the moment PG&E crews are working to restore power to the few homes still standing.

The Fresno County Sheriff's Office plans on allowing entry into other areas as they become safe.

In Big Creek, Mary Ann Fitzgerald could still find things to save from her home.

Some Fresno County residents were given the opportunity to go in and survey the damage to their properties by the Creek Fire.

"I think the reality is here. And I'd seen enough pictures to know there wasn't gonna be anything left. But to me, there's quite a bit left," she said.

For more than four decades, she enjoyed a 2,400 square foot home in Big Creek. Fire crews said it was among the first to go up in flames when the fire swept through the small town.

Mary Ann had just finished clearing brush and trimming trees - as a precaution - before the fire broke out.

Her husband died five years ago - and their home was full of items they had handcrafted.

Looking at the rubble, Mary Ann could not imagine her husband witnessing this awful reality.

"I know it's kind of odd to say, but I wouldn't want him to see this. He would not be very happy with it. He worked long and hard on it," she said.

On Thursday, Assemblyman Jim Patterson accompanied her to survey the damage. He wants to streamline the process on a state level to help residents rebuild without too much red tape and extra expenses.

"I think that this area, Shaver Lake and others, are going to need some real attention with respect to permitting and insurance, electricity, water; this is going to be a big and somewhat difficult rebuild," he said.

The work to repair infrastructure and basic services is continuing around the clock including the restoration of burned power lines, taking down unstable and burned trees, and cleaning up debris.

The Southern California Edison hydroelectric power plant in Big Creek remains offline. It was shut down once the flames got dangerously close.