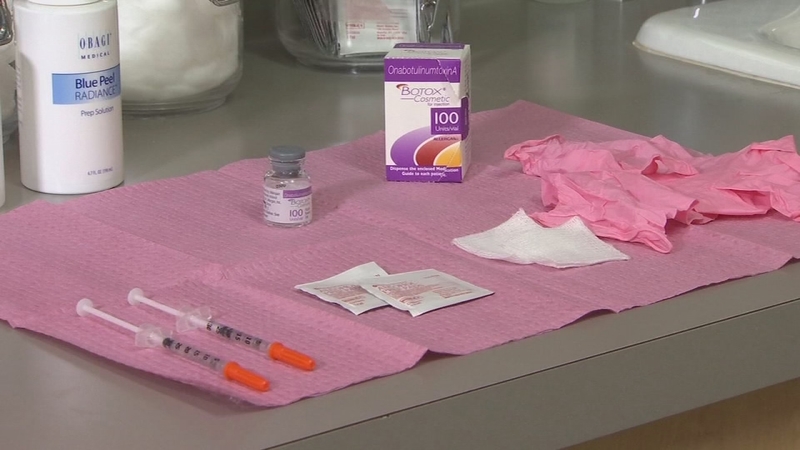 KINGSBURG, Calif. (KFSN) -- The price of beauty, for some people, is cosmetic injections of prescription products. Botox for frown lines or crow's feet. Juvederm to fill out lips. Latisse to lengthen eyelashes. Radiesse for wrinkles.

In the 21st century, these drugs are in widespread use, but the law says a doctor, a physician's assistant, or a nurse practitioner, needs to examine the patient first and be immediately available afterward.

"All of these do have an inherent risk in them and where the danger lies is, unfortunately, at some point somebody might experience some of these side effects and if there is a doctor on site, they may know how to treat that," said Dr. Uma Rao.

Dr. Rao has performed aesthetic procedures for 14 years and she's concerned about the proliferation of offices conducting the procedures with no doctor to be found.

"There are so many places in town that you can go to, almost like these mom and pop popup places that could do a lot of harm."

Kingsburg nurse Rebekah Demoss has operated one of those places. The Department of Consumer Affairs investigated her in 2014 for giving Botox, Juvederm, Latisse, and an anesthetic called lidocaine at private parties and out of her office at a small strip mall in Kingsburg.

Investigators accused Demoss of treating hundreds of patients without a doctor's supervision. The Fresno County District Attorney's Office prosecuted her for dispensing dangerous drugs and a judge gave her probation in January 2017.
EMBED More News Videos

The price of beauty, for some people, is cosmetic injections of prescription products.

Demoss nurse's license is now on probation, but she kept doing business at the Cosmeceutical Studio in Kingsburg. She even had her picture taken by the Kingsburg Recorder as she demonstrated botox and eyebrow lift treatments at a March 2017 function.

Action News uncovered a search warrant revealing Demoss moved her business a few blocks down the street in Kingsburg, opening the Cosmeceutical studio.

Two state investigators say they watched demoss giving botox injections there and they both bought the prescription drug Latisse from other staff members without ever seeing a doctor.

Dr. Rao says the law requiring a doctor to be there is meant to protect patients in case something goes wrong.

"Now somebody who doesn't have a license to practice medicine, might not know, and it might be too late to get somebody on site if something truly bad has happened."

At least one of Demoss's clients had a bad experience.

We talked to a woman who said she got a droopy eye after Botox and Juvederm injections left her bruised.

The bruising lasted about eight days and he droopy eye eventually went away too, but the bad experience has her convinced to stick to doctors for cosmetic procedures.

"This is the actual practice of medicine and I think a lot of people forget that," said Dr. Rao.

Demoss didn't return calls from Action News, but her attorney told me every patient now sees a doctor, a physician's assistant, or a nurse practitioner, usually via Skype.

He says medical records will prove it and he noted the undercover investigators didn't buy Latisse directly from Demoss.

The client who talked to me said she never saw a doctor or a physician's assistant or a nurse practitioner at the Cosmeceutical studio, although Dr. Robert Graham's license was on the wall.

When we visited the Cosmeceutical studio, he was working at his office in Northeast Fresno, and public documents seem to indicate that's standard operating procedure.

A medical board accusation against him says he never saw any patients or reviewed any medical records at Demoss's first business.

The warrant shows him listed as a 51% owner at the new business too.