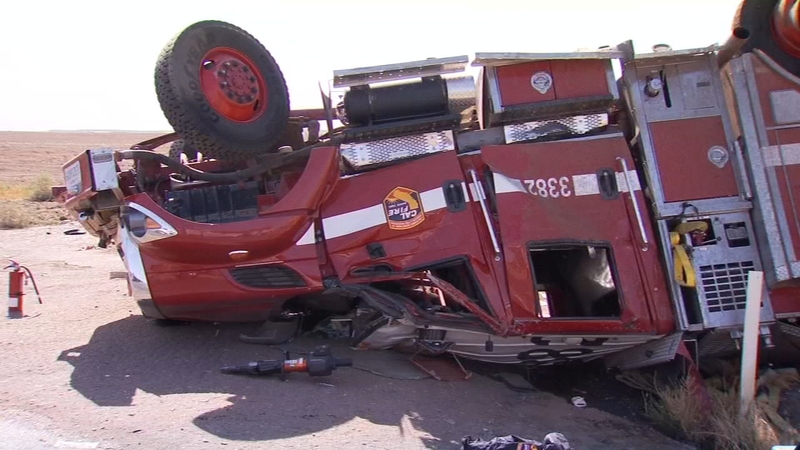 TULARE COUNTY, Calif. (KFSN) -- It was an alarming sight, a CAL FIRE truck flipped over and smashed items littered across the ground.

Detectives say the firefighter driving the truck lost control in the small town of Ducor, just south of Porterville, and the firefighting vehicle flipped multiple times.

The driver suffered major injuries in the crash and is being treated at Kaweah Delta Medical Center in Visalia, while the other three firefighters only had minor injuries.

"It is a difficult thing to witness and something even more difficult for those firefighters," said Toni Davis, from CAL FIRE.

The crash happened at 8:30 am Wednesday on Avenue 56. As the team approached the intersection with Road 240, the driver lost control.

CHP Officer Marc McWilliams says that the firefighting vehicle, "Veered off to the north shoulder, overcorrected to the left, went off the roadway and then overturned."

The vehicle flipped multiple times, landing on its roof.

According to investigators with the California Highway Patrol, the team was from San Diego and was on their way back home. They were in the area covering a Tulare County CAL FIRE station, while the team there fought the Creek Fire near Woodlake.

San Diego CAL FIRE says they're thankful to those who helped their first responders.

"Being so far away is really hard anytime something bad happens," said Thomas Shoots, the public information officer for CAL FIRE San Diego. "We are grateful for the community and for the support we are getting from our CAL FIRE brothers and sisters up north."

CHP says they're not sure if speed was a factor, but do confirm there were no obstacles on the roadway.

Still, they add, a lesson can be learned from this accident.