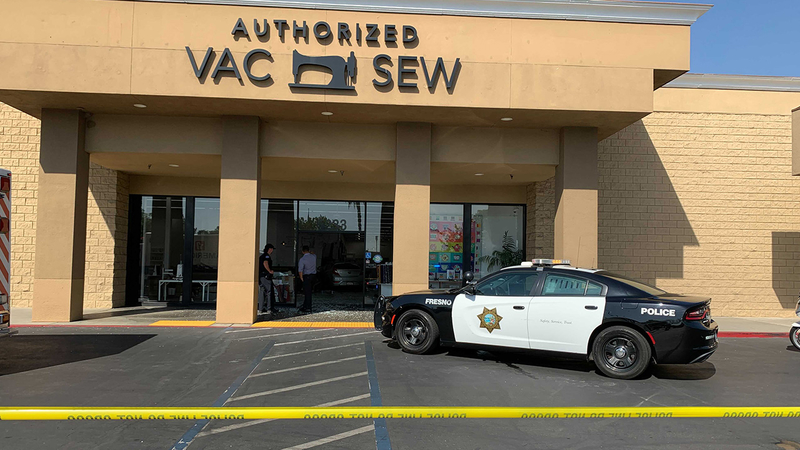 FRESNO, Calif. (KFSN) -- A man who was fired from his job Friday morning threw a fit before he immediately returning to drive his car right through the front door of a fabric store.

The owner of the Authorized Vac and Sew in north Fresno told Action News the fired employee was good at repairing sewing machines.

But he did not get along with co-workers and often made inappropriate comments.

Surveillance video showed how fast the car was moving when it smashed through the front door.

Employee Barbie Shiflet said, "I hit the floor. I was in a classroom with my girls and I told them to duck down. I didn't know if he had a gun."

The fired employee spent the past few months fixing sewing machines at the shop.

The store owner said he was fired because of the way he treated female co-workers.

She continued, "We were letting him go because we were afraid something like this might happen and sure enough, it happened."

One woman was taken to the hospital to be treated for cuts on her leg. Two other people suffered minor injuries.

Sgt. Presser said, "The vehicle went about 70 feet into the business and struck another wall."

Shiflet added, "The counter got shoved through the office and some of those in the office got hit with the cabinets."

The ex-employee now faces charges of assault with a deadly weapon.

About a dozen people were inside at the time. All were left shaken by the act of workplace violence.

Shiflet said, "He had a bad temper. This is a problem. This is a problem with businesses. What happens when you hire somebody with anger issues? How do you send them on their way without something like this happening?"

The man arrested for the incident was undergoing a mental health evaluation.