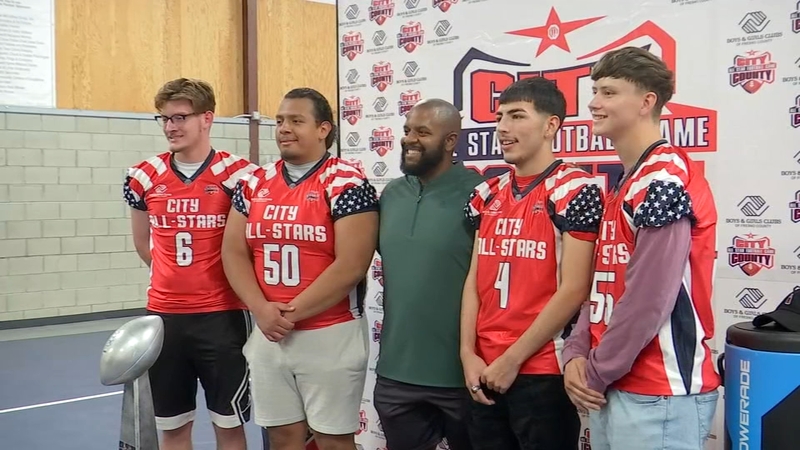 FRESNO, Calif. (KFSN) -- For the first time in its 66-year history, the Fresno City County All Star Football Game was canceled due to COVID-19.

The game is a tradition in the Valley, a chance for standout seniors to be recognized and to play alongside players from other schools one last time.

"It's something I always worked for, I always wanted to be an all-star," said Blake Baldwin of Clovis East.

The committee draws from 40 high schools throughout Fresno and Madera counties.

"For me, growing up I always wanted to play in this game, so it's unfortunate we couldn't play but being selected for this game is a big honor," says Jameson Silva of Central High.

Hoover High Head Football Coach Rus Pickett was supposed to be the Coach for City this year. He was excited to reunite with his players at the jersey celebration.

"Now they're in history, it's penciled in, so they get to carry that token in their pocket for their next phase in life," says Pickett.

Says Julian Diaz from Hoover High:
"I have a lot of family who have been playing on the team so when I got named to it I was honored. "

The annual game is also a fundraiser for the Boys & Girls Clubs of America. A single game can raise up to $50,000. Despite the canceled event, it's not too late to donate.

"We lost four major events this year, we took a hit. It's just sad to see the empty clubs, once this is over with, we do need help now more than ever because of the pandemic," says Director of Community Relations and Special Events Sandra Chaney.

Typically the teams would be out in the community this week leading up to game day. Jim Woods says they try to replicate an atmosphere similar to the collegiate level.

"Going out to children's hospital, doing things with the players so they have an idea of what a 'bowl week' is like. We just want to make it bigger, we think Fresno can make it bigger and I think it should be," says Jim Woods, chairman of the game.

The seniors weren't able to play with each other one last time, but many are looking forward to competing against one another in college.

"It's going to be a blessing to play against Fresno State, I'm looking forward to it," says Tory Horton from Washington Union.