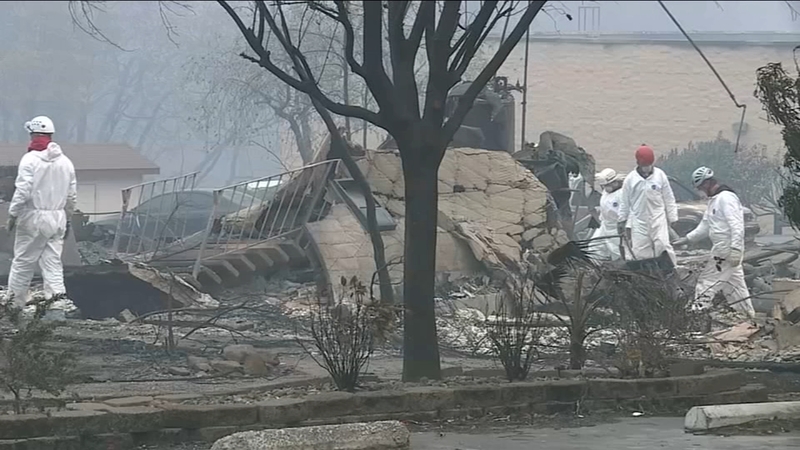 FRESNO, Calif. (KFSN) -- Regional Task Force 5 was deployed on Saturday to the Camp Fire to help with recovery efforts.

The Camp Fire has killed over 70 people and hundreds are still missing.

Justin Simmons, who is a Fresno Fire firefighter and search team manager, said the destruction the Camp Fire caused is hard to put into words.

"Just the amount of destruction is unprecedented," he said.

He added you can't prepare for the amount of devastation he saw on day one of searching.

"We can't talk about specifically what we find and what we see," Simmons said. "What I can say is that, it's not something. I wouldn't wish anybody to have to see or anybody have to do".

Simmons, like many others, try to block out the emotions but sometimes it's hard especially since he has a wife and kids at home.

"You can't do it 100%, any of this could have happened, a lot of us live out in similar environments in Fresno, a lot of us like to live in a little but of space," he said.

Paul Garnier, who is a captain with Fresno fire and working as a spokesman for the Camp Fire, said being at the Camp Fire has been tough.

"The scale of destruction is unparalleled. So seeing that is a bit of an emotional drain," he said. "Myself, with my partner Eric we've been embedded in these evacuation centers. We've been making connections with people there. We've done address verification to put to rest the uneasiness of not knowing. We've been able to tell people 'Yes you do have a home to go back to', or the unfortunate times we've had to tell people they do not".

Garnier said firefighters have resources available to them during these stressful times.

He mentioned it's becoming more common to have counselors ready to talk to first responders.

Garnier added there is also local resources for firefighters when they came back home to the valley.

"Fresno City, for example, has the EAP, the Employee Assistance Program. Those programs are really good to help us deal with the types of stress and emotional overload that we deal with a lot on these types of incidents," Garnier explained.

Simmons said he has a great support system with his family and friends.

He said it's hard to be away from home with Thanksgiving coming up, but knows his family will be greeting him with open arms soon.

His main concern and focus are on those impacted by the Camp Fire.

Simmons and the team want to finish the task they came there to do so families can get back into the area to see if they can find anything untouched by the flames.

"We want to get it done so the families can get closure and we can get people back in to, you know it might not be much but hopefully people are able to find something at each of these residences that means something to them," he said.

However, he is concerned about the rain California is going to see this week because it could hinder their search efforts.

"We are in a recovery effort. So with the amount of rain that is expected, if it is a worst case scenario, then there may be a day or two where no one is up here on the hill searching because there are so many trees, there are so many areas that are impacted by this that there is the possibility of landslides and floods," Simmons explained.

The team is expected to be assisting with recovery efforts for at least two weeks, but it could be longer.