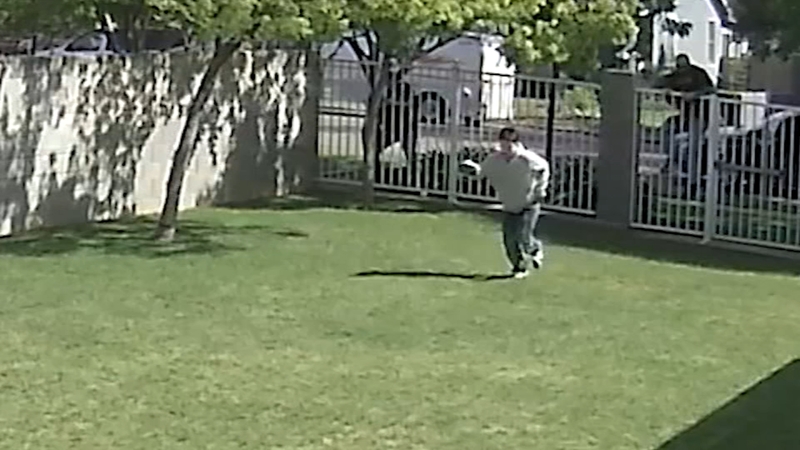 FRESNO, Calif. (KFSN) -- There's new scrutiny for a closed investigation after Action News acquired video of a Fresno police officer shooting and killing an unarmed teenager who was under investigation in connection with a homicide.

The April 2017 case seems headed for a trial next year, but legal analysts say it's likely to be expensive for taxpayers.

One of the lawyers suing the city in this case won a $2.2 million settlement in 2016 for another police shooting case.

He got the department to change its policy to require an "immediate threat" of death or serious bodily injury for an officer to use deadly force instead of "imminent threat" -- an actual threat instead of a potential threat. But five months afterwards, the sergeant who killed Isiah Murrietta-Golding said he didn't know anything changed.

The 16-year-old ran from police who stopped him, made it about a block away, jumped the fence at a daycare, and then got shot.

Police said officers tried to detain and question the teen because they suspected he and his 17-year-old brother were involved in a shooting the day before, but Isiah wasn't the shooter.

"They've acknowledged they didn't even have probable cause to arrest Isiah on the day they shot him and they were not focused on Isiah," said plaintiff's attorney Michael Haddad, who represents the boy's mother. "They thought his brother was the shooter."

Family members say the older brother was convicted of voluntary manslaughter in the homicide investigation.

He later said he thought Murrietta might be armed, and the teenager made eye contact and reached for his waistband, so the officer feared for his life.

But Haddad says the video shows he was under no immediate threat, which is what Fresno Police Department policy should require.

"He wasn't looking anywhere in the direction of the sergeant," he said. "He wasn't touching his waist. And the sergeant just gunned him down and shot him in the back of the head."

Legal analyst Bill Schmidt, who's represented several families in police shooting lawsuits, says officers get plenty of time with their defense attorneys, and they get to watch all the video before making any statements, so every statement ends up using the same boilerplate language to avoid criminal charges and civil responsibility.

In this case, the district attorney's office did not file charges against the officer and the Office of Independent Review found the shooting justified.

"Ultimately the suspect elected to make the decision to run from a traffic stop instead of complying with the officer's instructions which then resulted in an OIS (officer-involved shooting)," wrote Independent Review John Gliatta.

He believes most people who see the video in this case won't see a justified shooting.

"It was horrendous," Schmidt said. "I was just... I don't think the officer knew that this was going to be captured on tape."

Neither Sgt. Villalvazo nor the officer who jumped the fence to chase Murrietta wore body cameras. The Office of Independent Review made ten recommendations for change at the department in light of what happened in the incident, including getting body cameras on officers like them.

"In view of the high risk activities of several of the specialized units it is recommended the next acquisition of cameras be assigned to the specialized units such as SVB-TAC and SRT," Gliatta wrote. "In this incident neither of the two SVB-TAC officers, who were closest to the suspect at the time of the OIS, were issued a body worn camera. It was also determined two of the SRT officers with assigned body worn cameras did not activate their cameras during the traffic stop and foot pursuit."

New Fresno police chief Andy Hall declined comment for our initial story Tuesday, but we asked again and he released a statement late Wednesday asking the public not to rush to judgment.


"The City of Fresno has a policy not to comment on pending litigation, however in this case I feel it is necessary to make an exception," Hall said.
"I would like to ask the public not to rush to judgement. The video released yesterday is an officer involved shooting that occurred over 2 years ago. The use of lethal force in this case occurred while officers were investigating a homicide. The 16-year-old in this case was involved in the homicide with his brother and the brother was later arrested and pled guilty.
The video represents a different vantage point and was not what the pursuing officers could see. The 16-year-old was also known to carry firearms and had jumped a fence into a child daycare center.
The officer involved shooting was investigated by the Fresno Police Department 's Internal Affairs Bureau, the Fresno County District Attorney's Office and the City of Fresno's Office of Independent Review. All three reviews concluded that the use of lethal force was justified.
The ongoing judicial processes will take into consideration all of the factors involved in this officer involved shooting."

The Office of Independent Review also addressed the issue of the officer saying he was concerned because Murrietta jumped into the yard at a daycare center with this recommendation:

"During the briefing the field of fire when discharging a weapon should be stressed and repeated," Gliatta wrote. "One of the pursuing officers stated he was concerned when the suspect entered the fenced-in area of the business. The officer stated he was concerned for the possible presence of occupants in the business due to a multi-passenger vehicle parked by the fence. The officer then fired his weapon in the direction of the suspect but it was also in the direction of the business structure. The adjacent open area was clearly not occupied at the time but an errant round could have entered the building where it was unknown if people were present."
Report a correction or typo
Related topics:
fresnocrimeofficer involved shootingshootinglawsuitfresno police department
Copyright © 2022 KFSN-TV. All Rights Reserved.
OFFICER INVOLVED SHOOTING
Suspect who ran toward police with hammer fatally shot by officers
Man shot by Fresno police, accused of stabbing K9 identified
Fresno police shoot wanted suspect accused of stabbing K9
26-year-old man shot by Fresno police officers identified
TOP STORIES
Supreme Court Justice Stephen Breyer to retire
39-year-old man shot in Visalia, police investigating
Fresno PD searching for suspect in connection to 7-Eleven robberies
Fed expected to hike interest rates in effort to tame inflation
Owners stop burglar breaking into central Fresno smoke shop
Biden administration officially withdraws vaccine rule
Missing 69-year-old Merced County man found safe, officials say
Show More
Detectives searching for 18-year-old wanted for Tulare Co. robbery
Foggy Day School Schedules, Fog Tracker from ABC30
Scientists monitoring new omicron subvariant BA.2
Mayor Jerry Dyer announces 'Homeless Assistance Response Team'
Affordable housing construction underway in SW Fresno
More TOP STORIES News