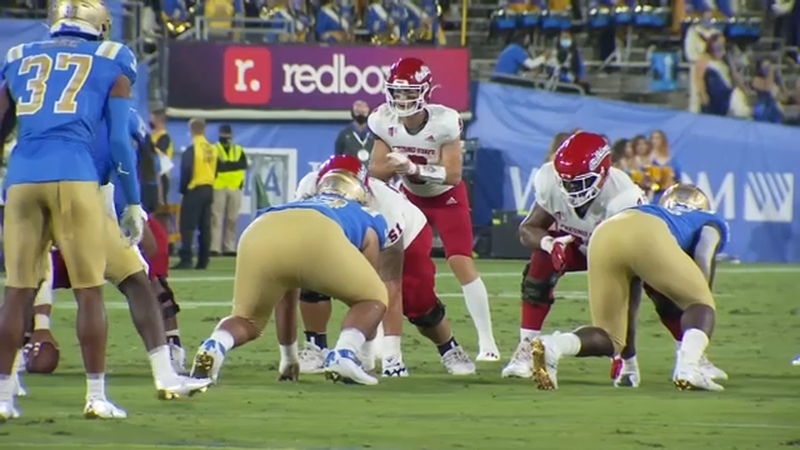 FRESNO, Calif. (KFSN) -- Saturday's win at the Rose Bowl has Fresno State back in the national rankings and once again the talk of college football.

Jake Haener's last-second heroics not only lifted Fresno State to an upset over UCLA, but the victory has seemed to re-energize the fan base while thrusting the program back into the national spotlight.

"We're certainly riding a lot of momentum and a lot of energy right now within the team," said head coach Kalen DeBoer.

Senior Associate Athletics Director Frank Pucher says that wave of momentum has translated into ticket sales -- the Bulldogs return on a short week to play host to UNLV Friday night.

"Fridays are always a little bit difficult but this game, we've seen sales that we perhaps have never seen before with Friday night games. Seven-thousand single-game tickets and student tickets are up near 4,000 right now, so we expect a good student crowd," Pucher said.

With a national TV audience watching, Saturday's gutsy performance at the Rose Bowl also elevated the program into a new stratosphere.

"Our social media numbers are through the roof right now. I think we're up to 8 million impressions since Saturday night on our social media accounts with nearly 5 million engagements, so people nationally are taking note of the Bulldog brand," Pucher said.

Here at home, Red Wavers have been snatching up everything with a Bulldog on it.

Bulldog Shop management says merchandise has been flying off the shelves since Saturday.

"Having the UCLA win was huge for us and everybody comes in here because they want all the stuff to wear to the games. Since we were off for a whole year, people are excited to support our Bulldogs," said Bulldog Shop manager Diane Brock.

Let's not forget how a successful football program can be a catalyst to help get a COVID-wary athletic department out of the red.

"We were walking up the ramp from the Rose Bowl after the victory Saturday night heading toward the buses and a fan literally yelled, 'How do I make a donation to the Bulldog Foundation?' I don't think that happens if we don't win that game, right," Pucher said.