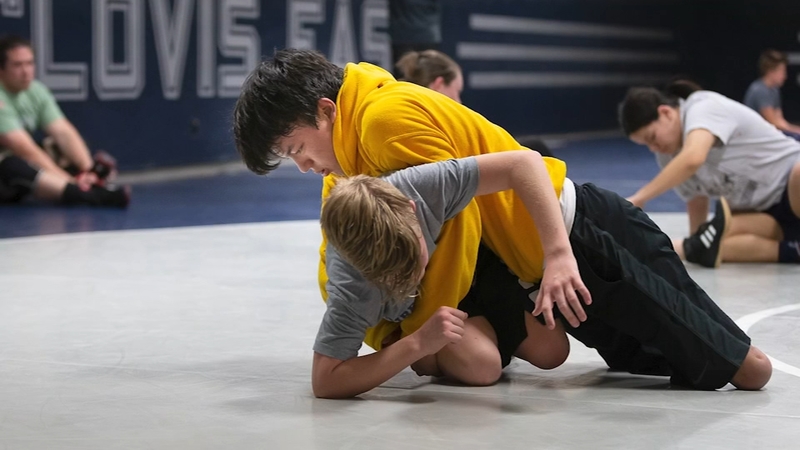 CLOVIS, Calif. (KFSN) -- A two-sport athlete at Clovis East just wrapped up his freshman year and he's already become an inspiration to his peers.

"It was a nice feeling really getting to connect with people," says Jordan.

Born without the tibia bone in both of his legs, Jordan is a double amputee. But he hasn't let that stop him.

"None of us really had experience coaching and teaching wrestling to someone in Jordan's situation. All the coaches and wrestlers were really put at ease with Jordan's sense of humor. He's able to laugh as he's learning and working through things, it really puts his teammates and partners at ease, it makes it a lot easier," says Adams.

Coach Adams says that Jordan had an advantage on the mat with his gymnastics background. The Timberwolf joined Break the Barriers in Fresno when he was younger.

"I got to do so much with them, and experience so much with, going out of the country to perform, it was life-changing. We performed for the Lakers, Kings, I went to Guatemala," he says.

Being a part of Break the Barriers made Jordan realize that he could push his body to try new things.

"In gymnastics, you have to have a strong upper body and be flexible, that helped me realize there are other sports to do," says Jordan.

In addition to Break the Barriers, Jordan was asked to compete for the Valley Children's adaptive track team. He made it to Junior nationals twice. This year he joined the Clovis East track team and was able to compete in one meet before the season was canceled. Jordan has never been discouraged when trying something new.

"It allows for other guys to use that as an inspiration, no excuse allowed if Jordan can do this there's no reason I can't. It really motivated the guys a bit, so it was a good opportunity for them to have someone else in the room," says Jordan.

Jordan is hoping to make the varsity lineup on the wrestling team before he graduates. He wants to go to Arizona State which has an adaptive sports program.

"His work ethic and commitment, his ability and willingness to overcome the challenges that are in front of him made him a leader in that. All the kids accepted him," says his coach.

An inspiring student-athlete who shows no signs of slowing down.