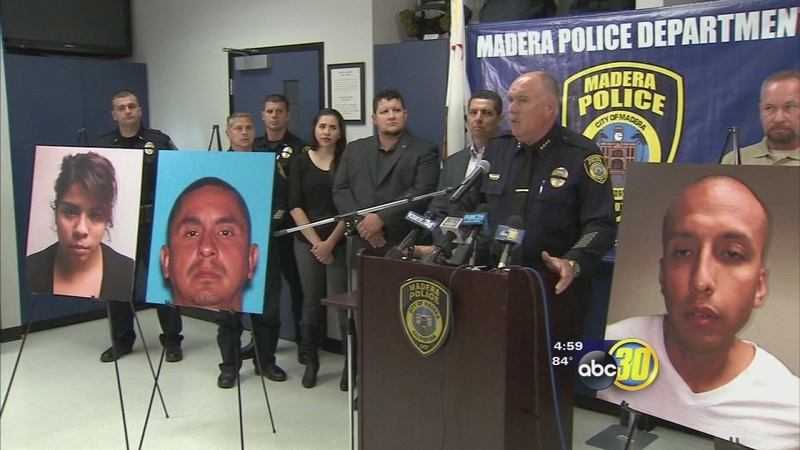 MADERA, Calif. (KFSN) -- Within two days of a brazen shooting at a Madera Police Officer and his passenger two Arrests have been made. In a Wednesday afternoon press conference Madera Police Chief Steve Frazier, alongside allied agencies in the case, detailed progress.

"Organizationally we were angry at that and I think that's what motivated our folks to push real hard and talking with the Marshal task force-- they're pretty angry too.'

Investigators said Garcia and James Cruz, also believed to be in the car, have Fresno gang ties and were believed to be under the influence which lead to the pursuit.

Garcia accused of stealing a car in that case too. He was also convicted in 2013 of being a felon in possession of a firearm.

"Smoking methamphetamine just shortly before being stopped and turned the wrong way, got lost, and no motive was given for the shooting other than they just didn't want to be stopped," said Frazier.

In January, Garcia was charged in another police chase in Fresno County. He is accused of stealing a car in that case too.

Dashcam footage from Sunday morning captured the terrifying moments 14 shots were fired at rookie officer Julian Garcia and his passenger. Three hitting the patrol car, and one hitting a nearby home.

The AR-15 pistol believed to be used in the case has been retrieved and all three suspects face attempted murder charges. 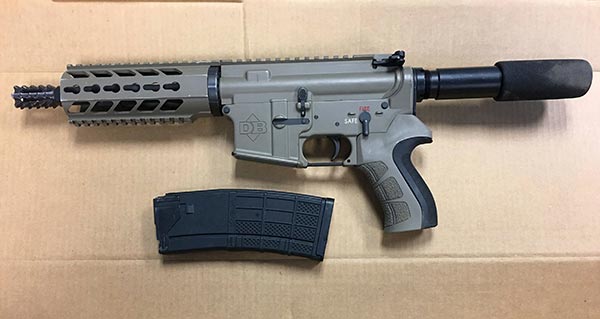 This Oct. 23, 2016, photo provided by the Madera Police Department shows a gun that was found near a patrol car that was shot at in Madera, Calif.

The passenger, Yesica Valencia, was on a civilian ride along as part of the citizens academy. The program, created three years ago, was designed to build allies and support within the community and encourages ride alongs.

Chief Frazier said they plan to revisit the programs policy.

"We will go back to twi ride-alongs a year. We will enforce that even with our citizens academy, but we've got a seven hour cap that we will be implementing."