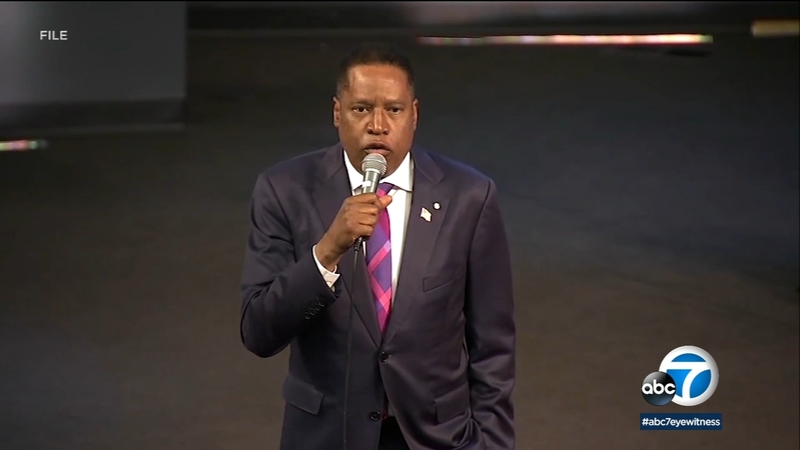 LOS ANGELES -- Alexandra Datig, who tells Eyewitness News she's Larry Elder's ex fiancée, claims the 69-year-old Elder verbally and psychologically abused her while he was, according to Datig, high on marijuana. The Republican candidate for governor in the recall election is currently leading in the polls.

Datig also claims Elder brandished a gun at her, which contributed to her decision to call off their 2015 engagement. The incident was first reported by Politico.

In a statement to Eyewitness News, Elder said, "I have never brandished a gun at anyone. I grew up in South Central; I know exactly how destructive this type of behavior is. It's not me, and everyone who knows me knows it's not me. These are salacious allegations. People do not get into public life precisely because of this type of politics of personal destruction. I am not going to dignify this with a response - it's beneath me. While my opponents and the Newsom campaign would love to keep voters distracted, I am going to stay focused on the issues that inspired 1.7 million Californians to petition for this recall."

In a one-on-one with Eyewitness News Thursday, California Gov. Gavin Newsom talked about the recall saying "this is a very consequential moment in California's history. Nothing can be taken for granted, and that's why I implore people to take seriously this recall."

With over 22 million ballots now in the mailboxes of California voters - and ads playing constantly on TV, it's becoming hard to ignore the recall. Newsom has 27 days left to convince Democrats to participate, and he believes that's plenty of time. Newsom's message as of late: This isn't just a governor's race, this election is about keeping California values alive and well. In our one-on-one with the governor, Elder continued to be Newsom's target.

"Not only is Larry Elder, day one, and he's proud of this, wants to eliminate the masks requirements for our kids in public schools, but he also wants to eliminate vaccine verification and take us off the same COVID cliff. And while we do have a stubborn 6.1 positivity rate with this Delta, it's a third of where Texas and Florida, is and I think we continue to outperform those other states," said Newsom.