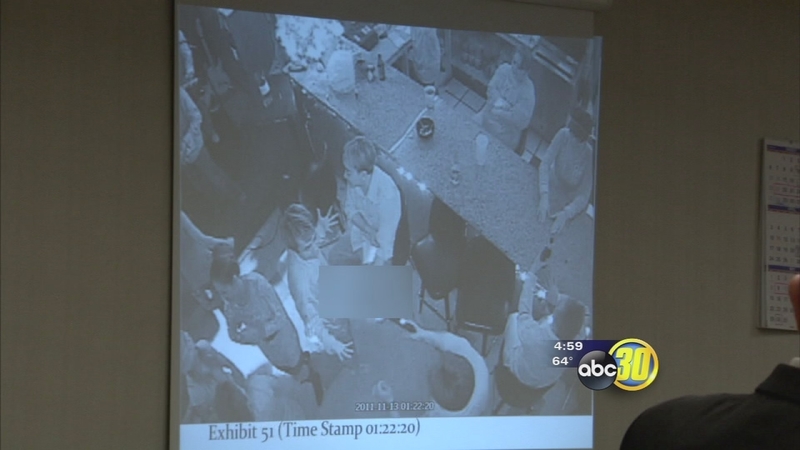 FRESNO, Calif. (KFSN) -- A Fresno County jury is about to decide whether a graphic video shows a murder. Alvin Khamchan, 35, was shot and killed at a Fresno restaurant in 2011. Lee Saysanasy is on trial for murder.

The video means there's no way Saysanasy can deny he killed Khamchan. But his defense attorney says what the video can't show proves he did it in self-defense.

Alvin Khamchan was armed with no weapon when Lee Saysanasy killed him. Just before the gunshots, surveillance video shows Khamchan's hands out, his palms open. Backing up the video a few moments, you see Khamchan poke his fingers towards Saysanasy's eyes. The reaction was quick. Saysanasy swatted the fingers and pulled his weapon. "The defendant felt disrespected and that leads to him taking out his 45-caliber handgun, cocking it, and shooting the victim point blank in the chest," said prosecutor Brian Hutchins.

Saysanasy fired three times. He says it was self-defense. He'd been warned that his life was in danger and he says the eye poke gesture was meant as a hex. His attorney says what music drowned out and the video couldn't show is that Khamchan said 'You're dead' as he cursed Saysanasy.

Self-defense was also an issue in 1992 when Saysanasy shot and killed another man at another restaurant. He admitted to manslaughter in that case. This time around, prosecutors argue it's definitely murder because Saysanasy came ready to kill. "It's no surprise to him," Hutchins said. "He carries the gun. He's ready to use the gun and when he takes it out, he pulls the trigger."

The defense will give its closing argument Wednesday morning.