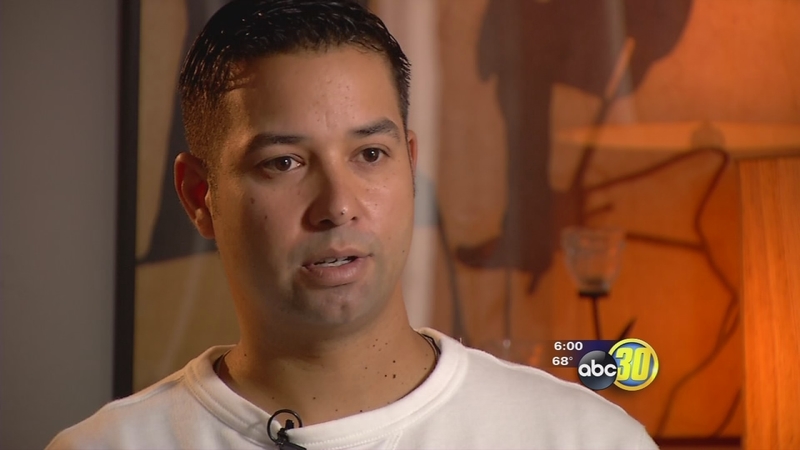 FRESNO, Calif. (KFSN) -- Jeffrey Sanchez is facing felony charges after a December encounter that, he says, was consensual.

For the first time, Jeff Sanchez is talking about the allegations that took him off the fire lines and tarnished his name. He says he has been falsely accused, and is now fundraising to pay for his defense attorney.

"It's been a complete nightmare. Not in 100 years did I think I would be in this type of a position," said Sanchez.

Jeff Sanchez is fighting to clear his name. Last December, the Fresno Firefighter found himself in the back of a Fresno County Sheriff's deputy car, accused of rape.

Sontaya Rose: "So you did have a sexual relationship with her that evening?"

Jeffrey: "Yes, which was consensual from start to finish."

Sanchez claims he met the girl he knew as "Nikki" at Martin's bar in Clovis. "She seemed intelligent and motivated with her future goals -- so I was interested in getting to know her a little bit more," said Sanchez.

After a few drinks, a small group went back to his house, according to the firefighter's attorney Jeff Hammerschmidt.

Sontaya: "So everyone was just hanging out here when they got back from Martin's."

Sanchez and Hammerschmidt gave Action News a close up look at the area where the crimes are alleged to have occurred -- including the pool house where the accuser says "she couldn't stop Jeffrey, and had no physical control over her body."

According to court documents, the alleged victim claimed: "She couldn't feel her extreme ties, her head was feeling weird, she was feeling cold, and she couldn't control parts of her body."

Sanchez said everything seemed fine until she went to leave. "I was completely shocked, you know I walked her out the front door and down the driveway and I opened up the gate for her to see 4 or 5 sheriff officers."

Toxicology tests taken from the accuser show her blood alcohol content hours after the sexual encounter was 0.11. She was also tested for two date rape drugs -- both tests came back negative. She did admit to smoking marijuana at his home, and that was also in her system.

Sanchez did not test positive for any drugs and had a blood alcohol content of point 0.05.

Attorney Jeff Hammerschmidt says his client was misled by this young woman from the start. "He found out that her name was not "Nikki" and that name was not a nickname for her true name and that she wasn't who she represented herself to be."