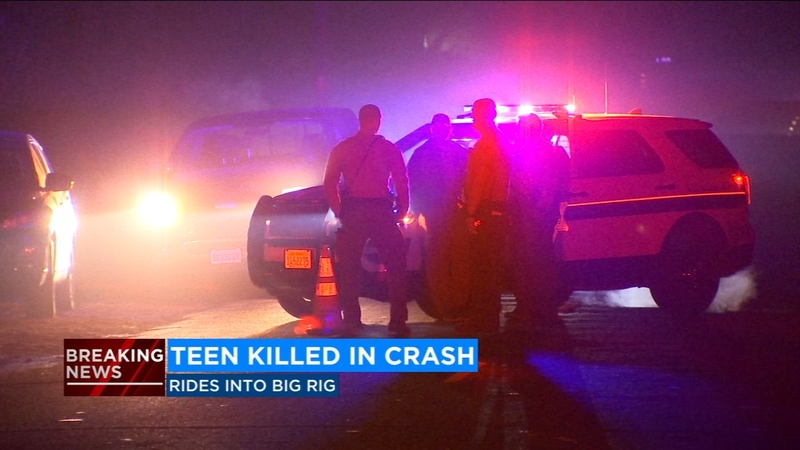 FRESNO, Calif. (KFSN) -- Loved ones have identified him as 16-year-old Ramon Gonzalez.

He was a sophomore and on the junior varsity football team. By the number of calls and comments on our social media pages, it is obvious he was loved by this community and will be missed.

The crash happened just before 5 p.m. at Clovis Avenue in Fresno County between Selma and Fowler.

Investigators say they believe the teen was by himself-- riding a dirt bike on a trail along the roadway.

They say he came from behind the trees to cross Clovis Avenue and hit the side of a big rig.

Absolutely heartbreaking. Tonight we learn more about the 16 year-old killed in a Fresno County crash while on his dirt bike. What investigators are saying about the crash and how loved ones are reacting tonight on @ABC30 https://t.co/0Khc90q9h7

Investigators say there is no way the driver could have avoided the teen--adding it is likely Gonzalez couldn't see traffic crossing.

That driver of the big rig did stay on scene and fully cooperated with the investigation.

"He was a good kid always willing to help. He had a big heart for the game of football that he always played and it's sad for his family," said Julee Perez.

She went on to tell us, just how much Gonzalez loved the game. She said even though he was injured during one of his final seasons with the bandits. He still made it to every practice and helped the coaches with whatever they needed.

Authorities say the bikes he was riding is not street legal. They are unsure of what he was doing on the road when he collided into a semi-truck.

Investigators say they believe the teen was by himself riding on a dirt trail along the roadway.

Authorities say he came from behind the trees to cross Clovis Avenue and hit the side of the big rig.

Investigators say there is no way the big rig could have avoided the teen--adding it's likely the teen on the dirt bike couldn't see traffic crossing.

"Just where he was looking where he was coming from. There's no way he could've seen the big rig coming, so I'm not sure the vision he had there wasn't any," said Sgt. Edward Jacobs.

The driver of the big rig did stay on scene and fully cooperated with the investigation.

Officers on scene say he was visibly upset.

He had just ended his shift hauling pomegranates. They add the dirt bike came from his left and he had already passed where the teen rode out. He heard the collision but it happened behind him.

Sheriff's deputies and CHP officers were out there for three hours taking measurements but have since cleared the scene.