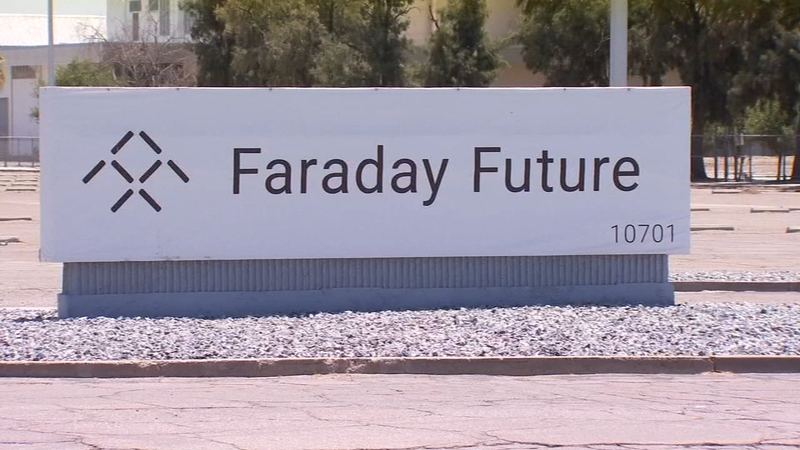 HANFORD, Calif. (KFSN) -- A South Valley building that was supposed to be the manufacturing center for an electric car company is now all but empty, and it's been that way for months.

Faraday Future once promised hundreds of high-paying jobs in Hanford.

An employee who wants to remain anonymous says about 40 workers who were furloughed in Hanford, including himself, were recently terminated.

The company says most furloughed workers left on their own, adding there are still a few active workers at the Hanford plant.

He was placed on furlough, meaning no work and no pay, but he waited patiently, holding out hope that the Los Angeles-based company would solve its complex financial issues.

In the meantime, the company issued promising press releases detailing new financing arrangements worth hundreds of millions of dollars.

But in recent days, the source received a letter of "separation" from Faraday Future Human Resources.

He tells Action News he and other employees were "lured" and "scammed" by the company's Chinese CEO Jia Yueting, saying he also scammed his investors.

"(It's) a ruthless move that he only cared about his pockets and screwed all hard workin(g) people here (in the) valley who believed in him," the employee said.

"The Hanford facility is a critical part of our business to bring the all-electric FF 91 luxury vehicle to the market and remains in our business plan," Schilling said. "We will discuss our hiring status and the plans to restart our operations at our Hanford facility at a time when (it's) appropriate."

But even if the Hanford facility ever bounces back, the anonymous employee isn't sure he'd want to return.

"It would be (a) very hard choice because it (could) backfire 2 (months) later like it did this time."

"With the struggles that Faraday has faced during the last year it has definitely taken a toll on those that gave up good jobs to start a new career with Faraday," said Hanford Mayor Sue Sorensen. "Hanford continues to hope for the best for Faraday and as a City be available to work with them to help Faraday Future be successful in Hanford."
Report a correction or typo
Related topics:
societyhanfordhanfordbusinessjobs
Copyright © 2021 KFSN-TV. All Rights Reserved.
HANFORD
A football tribute to Hanford siblings killed in stabbing
Hanford family grieves after siblings stabbed to death
Adventist Health hospitals to honor COVID-19 victims Friday night
Faraday Future says new merger will fund EV production at Hanford plant
TOP STORIES
LIVE: Putin addresses Russia after hours of talks with Biden
LIVE: Newsom speaks 1 day after CA reopening
Merced teacher back home after battle with COVID-19
Looking back at the ups and downs of COVID in Central CA
Fire burns 2 homes in northeast Fresno
24-year-old man shot in southwest Fresno, police say
What changes throughout Central California as state reopens
Show More
Tips for staying safe during a heat wave
Is being vaccinated a requirement for returning to work?
Fresno reopens public pools amid heat wave
Fresno police chief proposes $1.9M budget for department
Cooling centers open in the Central Valley
More TOP STORIES News