Undercover officers shot at in Southwest 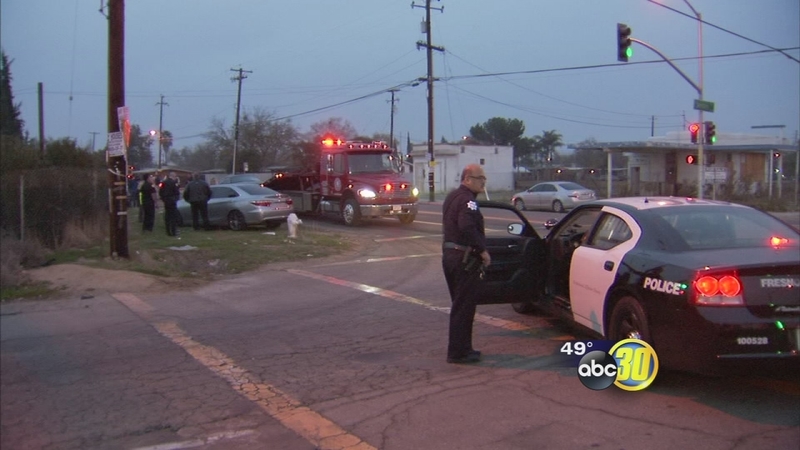 Undercover officers shot at in Southwest

FRESNO, Calif. (KFSN) -- Fresno Police are still searching for two suspects after they say one of them shot at an unmarked police car with two officers inside.

Police said it happened just before 4:00 p.m. near the intersection of Jensen and Walnut in Southwest Fresno. Though nobody was injured, Fresno Police Chief Jerry Dyer says a bullet was headed directly for two of his officers, when one man shot the rear window of their undercover car late Tuesday afternoon. "We're very fortunate, very fortunate today that we did not have a police officer killed in our city," Dyer said.

Dyer said the two gun crimes unit detectives, dressed in plain-clothes, were on their way back from a training center when they saw two men on the side of the street who they possibly recognized. That's when one of the men fired, striking the back window of the unmarked car.

The officers called for back-up, police set up a perimeter, and an hours-long search for the suspects began. Sixty to 70 officers searched yard by yard, and police helicopters searched by air. Some residents inside the search area were evacuated from their homes, including a woman named Latrice, who said police searched her entire apartment complex on Jensen Avenue. "It's nonsense, and it don't make no sense," she said. "I understand they have certain drills they gotta abide by it shouldn't be like this. They shouldn't treat the residents of Fresno like this."

This shooting comes three days after other Fresno police officers were shot at at a parking lot outside the Big Fresno Fair while trying to break up a fight. Echoing what he said during a press conference one day earlier, dyer again turned the focus on West Fresno gangs. "We're having a significant problem right now with West Fresno gangs, we had officers that were shot at this weekend, again two officers shot at today, (we're) not certain as to whether or not these two individuals knew the two officers in the car were, in fact, police officers," Dyer said.

Regardless, Dyer said it's troublesome but is confident they will find the suspects responsible for this close-call.
Related topics:
fresno southwestundercoverjerry dyershootingfresnooffice
Copyright © 2021 KFSN-TV. All Rights Reserved.
FRESNO