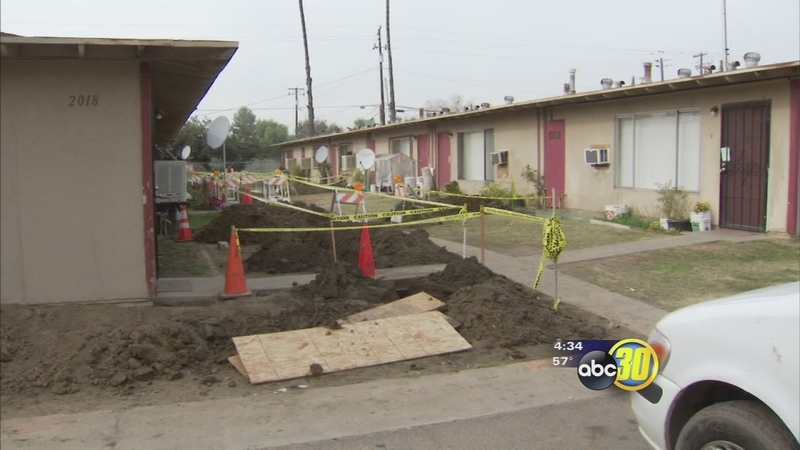 FRESNO, Calif. (KFSN) -- While repairs are underway, residents of Summerset Village are now in their third week without heat or hot water. It's expected to be at least three weeks until the gas lines are fixed.

We asked 82-year-old Milagros Pantig if she was getting frustrated. "Oh yes, because the things that happen to us, oh, what shall we do. We don't know what to do."

Help remains at the complex. Close to a thousand meals a day are being cooked and served by members of the Southern Baptist Convention. Dennis Oxford has been overseeing work at the portable kitchen. "At times here I might have 50 people running around here, anything from chopping chicken and vegetables like they are now to delivering to shut-ins."

The labor is free but the food is being purchased by the Red Cross, and it's costing $2,000 to $3,000 a day. The Fresno Interdenominational Refugee Ministries, or FIRM, has been coordinating much of the relief effort. Executive Director Zack Darrah says it's getting expensive. "I think we are going to be looking in the $70 to $80 thousand d range when we are done here and that's only if this timeline of 3 weeks holds up."

Henry is an investor and owns a popular restaurant in Sausalito. Henry told Action News this week he will cover the costs of repairs. Replacing the gas lines is estimated to be a nearly $400,000 job.

Action News has learned that property owner Chris Henry has asked a local property management company to take over complex and oversee the repairs, which he says he will pay for. The company has indicated an interest in buying the property from Henry.