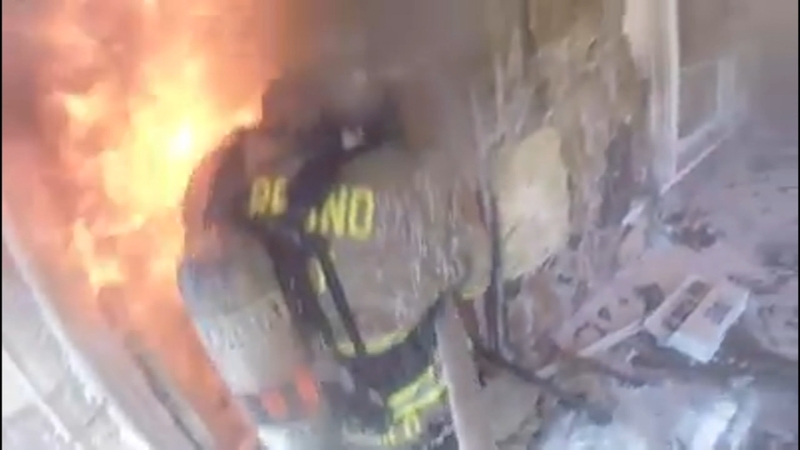 FRESNO, Calif. (KFSN) -- Fresno firefighters stopped a fire at a vacant home from spreading to neighboring homes in central Fresno Tuesday. Precisely what happened is under investigation, but firefighters already know they shouldn't have had to put themselves at risk.

The home is one of many they have to visit over and over again even though they're boarded up and supposed to be empty. A cloud of flames nearly decked a Fresno firefighter at another fire on June 19. Helmet camera video shows the crew from Engine Five trying to protect the abandoned home for the second time in a week.

Less than a week later, another abandoned home burned in another fire.

"They identified that the main residence here is vacant, abandoned, it's boarded up," said Fresno firefighter Robert Castillo. "We do have a history of coming out here. Back in April, we came out here for a residential fire."

Firefighters left another notch in the Plexiglass designed to keep vagrants out, but apparently not working. Neighbors say the supposedly empty home always seems pretty full.

"They left their needles here, and we would see women come late at night with the men and they'd just stay here at the house," said Heaven Moran, whose mother lives next door.

Tuesday's fire destroyed a detached garage. The owners have marked the house with a giant 'X' and the word 'basement' to let firefighters know what they're dealing with if they have to come here again.

"Since January, we've had four firefighter injuries battling these vacant house fires," Castillo said. "So they become not only a risk for firefighters but a nuisance to the neighborhood."