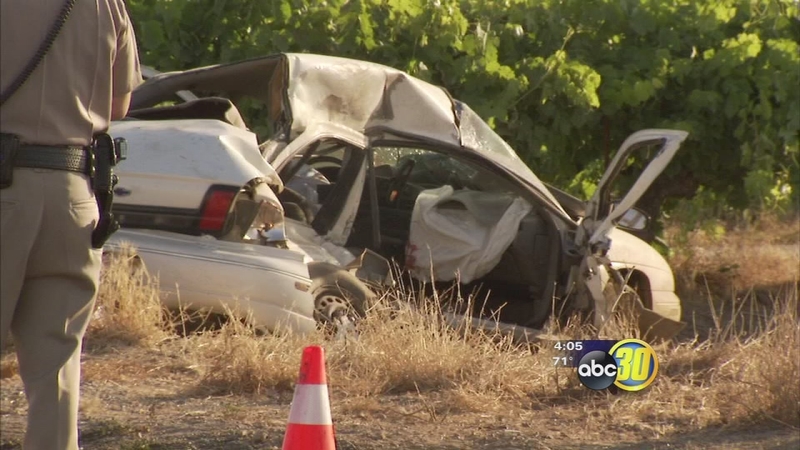 FRESNO, Calif. (KFSN) -- A blown stop sign may have been the cause of a fatal accident in Fresno County, according to the California Highway Patrol. It happened at the intersection of South and Chestnut west of Fowler.

Eloise Acevedo and her family woke up to a loud bang around 6am Wednesday morning.

"That's how loud it was, it sounded like an explosion," Acevedo said.

As the dust settled, it didn't take long for Acevedo to realize there had been a deadly accident across the street, so she called police.

"Everything all over the place, impact on the car you can see debris all over the road and everything," she said.

The CHP said a 2001 Chevy Lumina was traveling east on South Avenue, but may have run a stop sign and entered the path of a 2006 Ford F-350 going north on Chestnut.

"The occupants in the Lumina appeared to be wearing their seatbelts, airbags appeared to have been deployed, but it was a pretty significant impact," said CHP Sgt. Lenny Sherman.

He said the impact caused the deaths of its passengers, a 55-year-old man from Fresno and a woman in her 40s from Fresno. The CHP believes they were on their way to work. The 20-year-old male driver of the truck was from Exeter and had minor injuries.

"It starts at 5:30 in the morning and you'll see people driving by here and I don't know exactly how fast, but you know I'm going to estimate some (are going) 80, 85, 70 anywhere, from there," said Chestnut Avenue resident Mike Jorgensen. "But you know, it's not 55."

About four years ago, Jorgensen said he complained to the CHP about people speeding. He said nothing came of it, but he still believes there's a way to prevent accidents, and even deaths.

"Chestnut needs to have a stop sign at this corner whether it be a four way stop or just move the stop sign from South Avenue to Chestnut Avenue," he said.

A Division Manager for Fresno County Road Maintenance said there's only been one other recorded accident at the intersection in the last five years. But they will do a traffic study here once they get an accident report from the CHP.