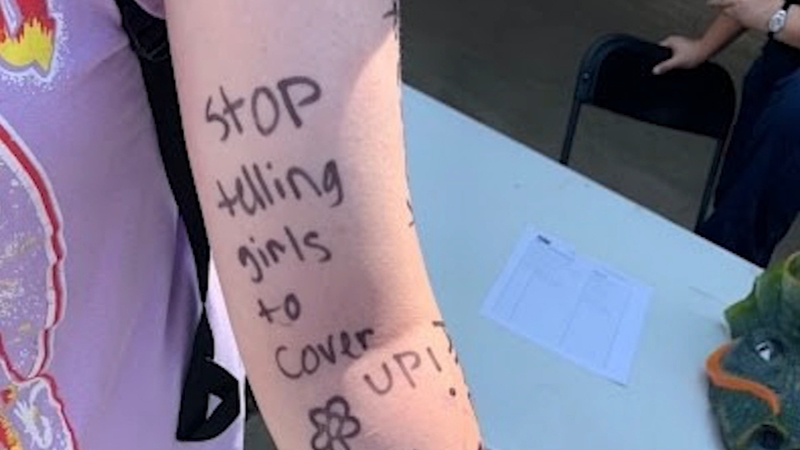 CLOVIS, Calif. (KFSN) -- Parents and students are calling on Clovis Unified to make changes to the dress code, and the district says it's open to discussion.

Some hot ticket items include the length of shorts, the width of tank top straps and how leggings can be worn. All of these are common female clothing choices and many girls say they feel called out.

The district says they're open to making changes but they want to make sure the purposes of the dress code are still being fulfilled.
"What we want is a dress code that makes us feel safer and makes us feel less targeted," says student Phoebe Schmitz.

Clovis Unified students are asking for a change.

"Tank tops have to be two inches wide and that's just not practical," added Schmitz. "It's really hard to find."

Many have called out the dress code saying it's unrealistic and targets females, even staging a whiteout in August to protest the current policy.

"Going to stores and trying to find jeans that aren't ripped or don't have frays are a lot harder to find and it's becoming more and more expensive," said student Anissa Molina.

The district says they're open to change and even made the decision months ago to bring the dress code back up for review.

"Have a discussion with our community and make sure the purposes we have for the dress code are being fulfilled in both the code itself and its enforcement," said Clovis Unified Spokesperson Kelly Avants.
They want to hear from parents before they make big changes.

"What I would love to see is make the policy more gender-neutral," said Ryan. "Why are we controlling the amount of leg a female can show without addressing the boys? Same with the shoulders. They both have shoulders, right? Why are we only monitoring the girls' shoulders?"

Any changes to the policy will need to be vetted by the board.