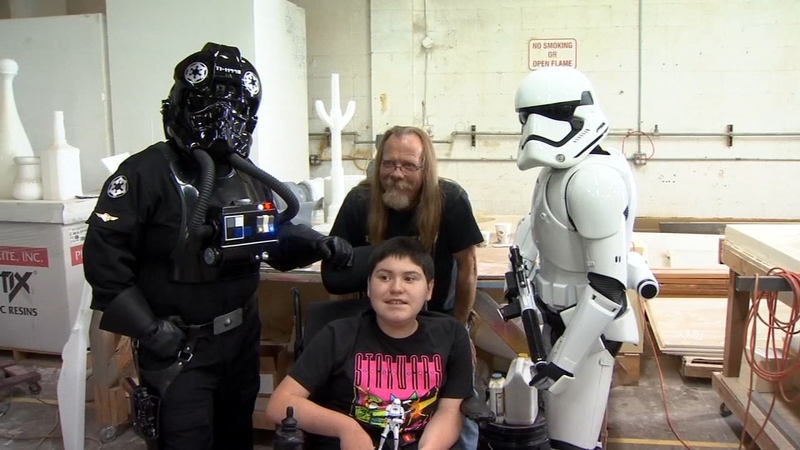 FRESNO, Calif. (KFSN) -- The force is strong with one Valley boy, who's getting a chance to debut an out of this world costume at San Diego's Comic-Con.

Maddox Ament spends his days in a wheelchair, but soon he will be transformed into a Star Wars character.

"Because I like Star Wars and I never really dressed up in a costume like his before," said Maddox Ament of Fresno

Maddox was one of seven kids picked in a nationwide contest by magic wheelchair to get a Star Wars costume and go to Comic-Con. Their Kickstarter campaign has brought in thousands of dollars to pay for the costumes and a trip to San Diego. They still need more funds to reach their goal.

Monster City Studios of Fresno is building Maddox's costumes. It just happened that Maddox was from the Valley. He will be Commander Cody, a clone trooper, riding a Boga, which is a lizard-like creature.

"We have to design it in 3D, we put it on one of our big foam mills, mill it out, then assemble it," said James Powell, Monster City Studios VP and Founder about making the unique costume that will be shaped around the wheelchair.

Powell said they usually build things for theme parks, but they are happy to be building confidence in kids through the costumes.

"I want other kids to learn about their kiddos and for the kids in wheelchairs to become the focus and center of attention. For once in their life give them something good," Powell said.

Mom Veronica Ament says she is looking forward to seeing her son experience Star Wars on another level.

"I think it's going to be awesome. Incredible to see. I think out of all of this just getting to see him smile and maybe forget about being in his wheelchair for a day will be great to see," said Veronica Ament.

Proving there are no limits to what these kids and a little imagination can do.